The purpose of business is to make a difference in the world: 1/4

Richard Branson was interviewed by Japanese journalist Mayumi Yoshinari in San Diego as part of a five-month long series about The Elders.

Published in Japan recently, read the translated interview, where Richard shares his thoughts on the formation of The Elders, the responsibility of wealth, and much more.

Formation of The Elders

Forgiveness is a very powerful weapon.

In every village and every town, we used to have a group of people called the Elders from whom we sought wisdom, knowledge, advice, courage... In 2007, together with President Nelson Mandela and Peter Gabriel (lead vocalist, Genesis) you formed the group called the Elders of the Internet Age with “a diplomatic league of superheroes,” as the New York Times called it. Would you explain your idea behind the founding of the Elders – the founding process?

I think that in this day and age, wars should be a thing of the past. We are sophisticated people, and... it’s incredible that we still go to war with each other. So when the Iraqi War started, I thought it was an unjust war – a wrong war. Yes, we all wanted to see get rid of Saddam Hussein, but not to go and kill, you know, 600-700,000 people in the process.

And Nelson Mandela, I had spoken with, and he agreed to go see Saddam Hussein to try and persuade him to step down. Sadly, the bombings started, and the meeting never took place. And it just gave me an idea that there are at least 12 incredible men and women in this world who have had high moral standing in their life and have had a lot of experience in negotiating and diplomacy – who could be the Elders of the world rather than the Elders of a village, maybe in the last 10 or 15 years of their life.

So I spoke with Nelson Mandela and Graca Machel, his wife, and they agreed to be the founding Elders. And they then asked people like Mary Robinson from Ireland; they asked Gro Harlem Brundtland from Norway; Kofi Annan; President Carter; Archbishop Tutu; actually, a wonderful lady from Japan; and a number of other people to see whether they would agree to become Elders. And they formed this incredible group of people who collectively have been much more powerful in negotiating peaceful settlements in countries than they would’ve been on their own.

You’ve mentioned that you were deeply impressed and influenced by President Nelson Mandela. What kind of influence did he have on you?

Nelson Mandela... I’ve had the privilege of knowing him since the day he came out of prison, so a long time. And his great friend, Archbishop Tutu. Together, they’ve shown the world that forgiveness is a very powerful weapon.

They were setting up a Truth and Reconciliation Commission (TRC) in South Africa where Archbishop Tutu oversaw people actually coming and apologising for the crimes they’ve committed. In the process, they managed to cleanse South Africa, and South Africa has become a proud nation again.

It’s just not something, I think, that any other country would have done.

So that one act of forgiveness, I think, has been Nelson Mandela’s greatest strength – to go from the 28 years in prison to forgiving the White Man and eventually his captors was a wonderful example.

Well, the way I get involved in setting up not-for-profit organisations like the Elders is in the same way that I would set up a business; you find a very good Chief Executive to run the organisation, you make sure that you raise enough money to pay for the cost of running the organization, you make sure it’s staffed well like a normal company, and then you let the Chief Executive working with The Elders get on and do the job. The actual physical cost of it is not enormous in relation to what can be achieved. I mean, if you can stop one war happening, you know, that’s priceless.

Absolutely. Have you always been keen on social issues and making a difference in the world throughout your life? 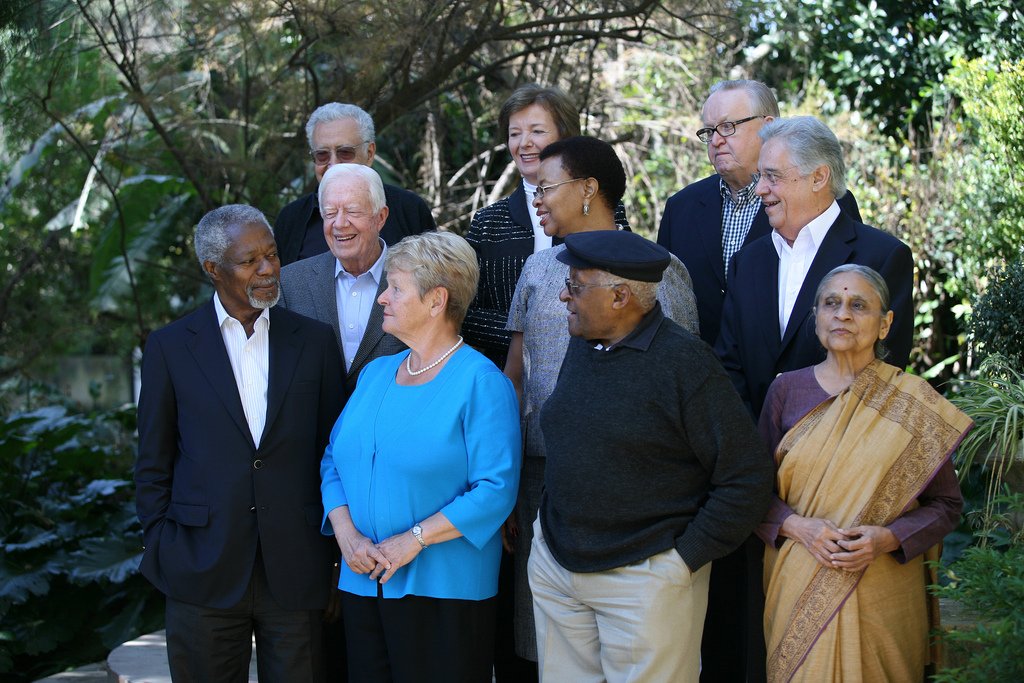 Most wars can be avoided, should be avoided, and we should do everything we can to stop wars breaking out.

How about your views on wars. Right now, there are over 17,000 nuclear bombs in the world. 8,500 in Russia,  7,700 in the US, 300 in France,  250 in China, 225 in the UK, about 100 in Pakistan, India, and Israel, and 10 in North Korea. (Federation of American Scientists 2013). The world is now so concerned about Iran probably making one. You are deeply involved with the Global Zero movement (a group working for nuclear disarmament). What is your view on nuclear weapons?

I’m a great supporter of Global Zero (international group of leaders dedicated to achieve elimination of nuclear weapons). I think it may have to happen in stages, but it has to start happening soon. There are way, way too many nuclear weapons in the world. They’re costly, and they put the world at risk, and they put people on the world at risk. And we never, ever, ever want to see a repeat of what happened in Japan.

Whether we’ll ever get to a world completely free of nuclear weapons, it may be unrealistic to ask, but that’s the end, because I think it’s difficult to ask other countries who don’t have nuclear weapons to not have them if we continue to have them ourselves. And therefore, in discussions with somebody like Iran, it’s much better to be able to say “we’re decommissioning our nuclear weapons, so we would ask that you don’t go any further.”

Should we avoid war at any cost, or should we be prepared to fight if there’s a wrongful accusation or invasion?

I think that we should do everything we can to avoid war, and that people go to war far too quickly. I was one of many people who campaigned against the Vietnamese War many years ago; it was a dreadful war, and it was a completely unnecessary war.

The Iraqi War – why did we have to go and kill and maim 600,000 people in order to get rid of Saddam Hussein? It was definitely a wrong war –and it’s caused so much misery in Iraq, but the spill-over from that has been enormous.

So I think most wars can be avoided, should be avoided, and we should do everything we can as a global community to stop wars breaking out.

There’s something called Patriotism, which sort of allows us to kill the truth – the truth can be the first casualty of war. How can we overcome this?

The world is becoming a world without borders through things like the Internet and through people traveling more, through people inter-marrying more. Personally, I think that’s a really good thing. And we should do everything we can to encourage it.

How about secrecy? Do you think secrecy strengthens a nation or a company, or weakens them?

Come back tomorrow to read part two of this article - The business model of the future.

This article was first published in English at The Elders.