Nthombi, the rhino orphan that refused to die

At the beginning of her one week assignment at The Rhino Orphanage in South Africa’s Limpopo Province, Jamie Joseph had no idea it would be a sanctuary for both animals and humans.

While you were sleeping, somewhere in Africa another rhino was brutally slaughtered, and by now its hacked-off horn is likely on its way to China or Vietnam where it is seen as a status symbol. It turns out a lot of rich and educated people actually think they’re cool and classy when they flash their wealth by wearing a bracelet made out of rhino horn. On the black market rhino horn is valued at US$100,000 a kilogram, more than gold, and yet a horn is made up mostly of keratin (the stuff of fingernails), and so it is incredibly sad and frustrating to see no end to this folly.

Some rhinos that are poached are mothers, and with their precious calf always by their side, when the poachers shoot and then start butchering the mother, the calf is there to witness this atrocity in all its horror. Baby Nthombi was just a few weeks old when they came for her mum in the Kruger National Park. They slashed and cut at her face with axes and machetes 21 times as she tried to defend her mutilated mother. 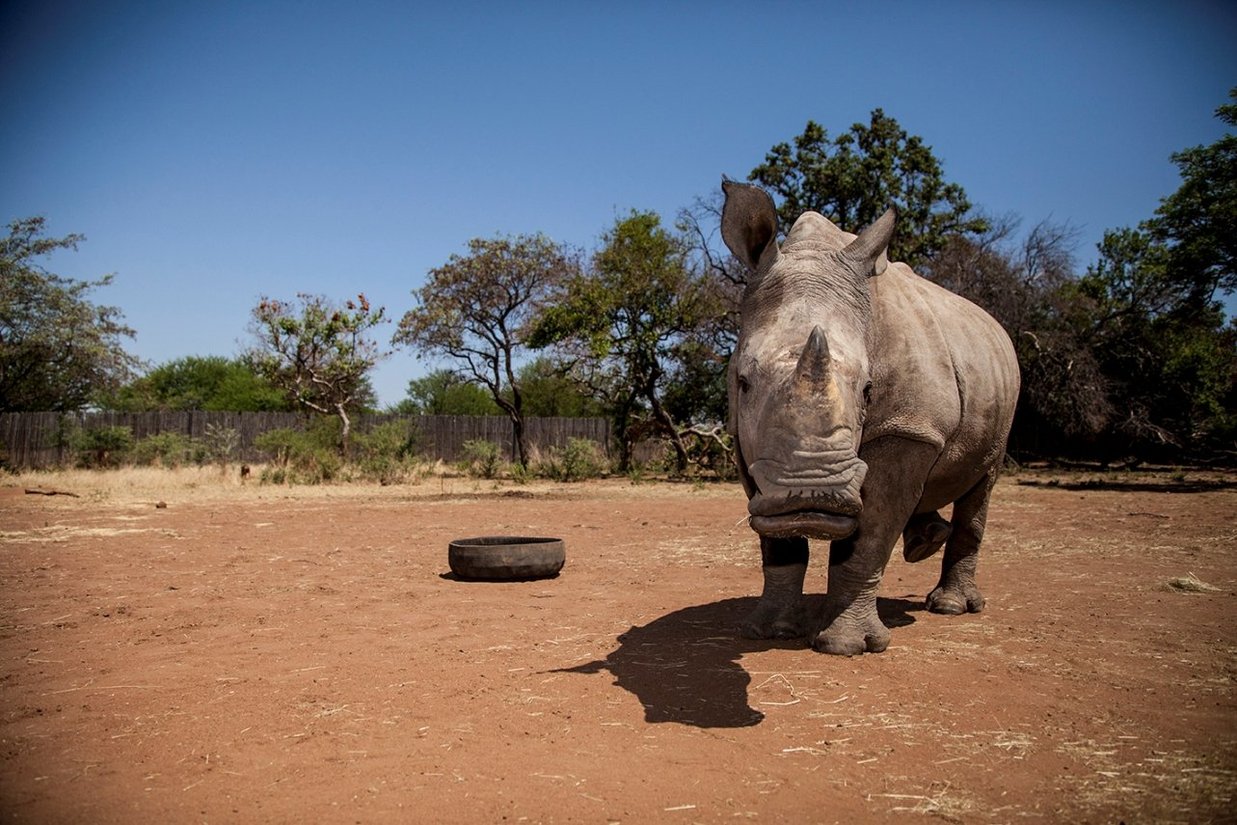 Simone, one of the caregivers at The Rhino Orphanage, drove with a team to Kruger in January last year to fetch Nthombi and bring her back to the orphanage where she could be properly cared for. At the time Simone had just turned 21, a student doing her practical year of Nature Management at the nearby Entabeni Reserve, and she had never worked with rhinos before.

“I got to Kruger and looked inside this room, and I saw this tiny rhino just lying there, not moving, and she had these deep cuts all over her face and body. It was horrific, and the sight of her tore me apart. Why? Why would anyone ever do such a disgusting thing to an innocent creature?”

Seven hours later they offloaded Nthombi at the orphanage and the treatment began; a combination of medical care and a whole lot of tender love. Her wounds were cleaned a few times a day, and in the beginning she was sleeping a lot, always with a care giver sleeping beside her so that they could constantly monitor her vital signs.

“That very first day I set eyes on Nthombi I just knew that I had to try and help her species,” says Simone’ as her voice begins to shake. “Just seeing her face and seeing what disgusting things humans do to rhinos, I had no idea until then. That made me determined to try and get a job at The Rhino Orphanage after I completed my studies, and dedicate all my energy to helping rhinos.” 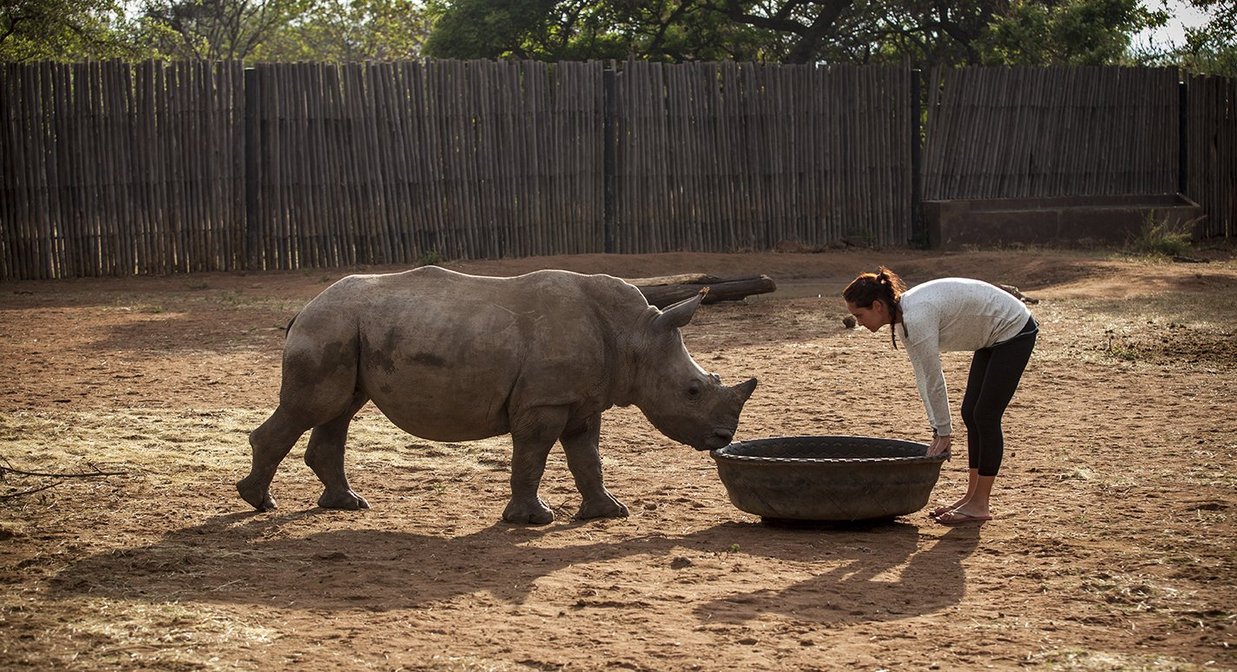 For the next few months Simone’ would help out at the orphanage whenever she was allowed, and she watched mindfully as the little rhino began to heal both inside and out. Nthombi stopped sleeping so much, and she began to crave all the attention she was getting. Once again, she felt loved.

Simone’ completed her practical studies, and then went home to Middleburg, about three hours away. Arrie van Deventer, founder of the orphanage, insisted she take a break and spend time with her family, before possibly returning.

“These are big animals,” Arrie would warn her, “They’re going to push you around and you’re only little. You need to think about these things.”

Simone’, five foot five, with a slim frame and big brown unwavering eyes, insisted she could handle it. To put things into perspective, a baby rhino weighs about 50kgs, but a mature calf weighs in at more than 1500kgs, and the orphans are cared for by their foster mums until they’re about three, the ripe age of independence when they can fend for themselves and return to the wild. And so when a rhino stamps on your toe, or accidentally bumps you, it’s going to hurt!

“But,” she says, “The occasional bruises are so worth it.”

Two very long months passed before she got the call from Arrie, a few days after the first dawn of 2014. She packed up all her things and returned to the orphanage the very next day.

“When I got back Nthombi looked so happy,” she beams. “And big! A 14 month old, attention seeking, milk guzzling, healthy rhino. And she had found a best friend in Nkwe too, another orphan about the same age as her.”

Nthombi is now 23 months, and is not as cuddly as she once was. She’s growing up fast and becoming a lot more independent, and the care givers start to limit human contact as they get older, so that rhinos can focus on being rhinos.

Simone’ shows me some of her photos, her rhino “kids” that have now left home, and baby pictures of the ones that are still here and growing up so fast. She has been at the orphanage full time for nearly a year now. I ask her if this life she has chosen is as rewarding as she thought it would be.

“It’s so much better than I ever imagined,” she tells me. 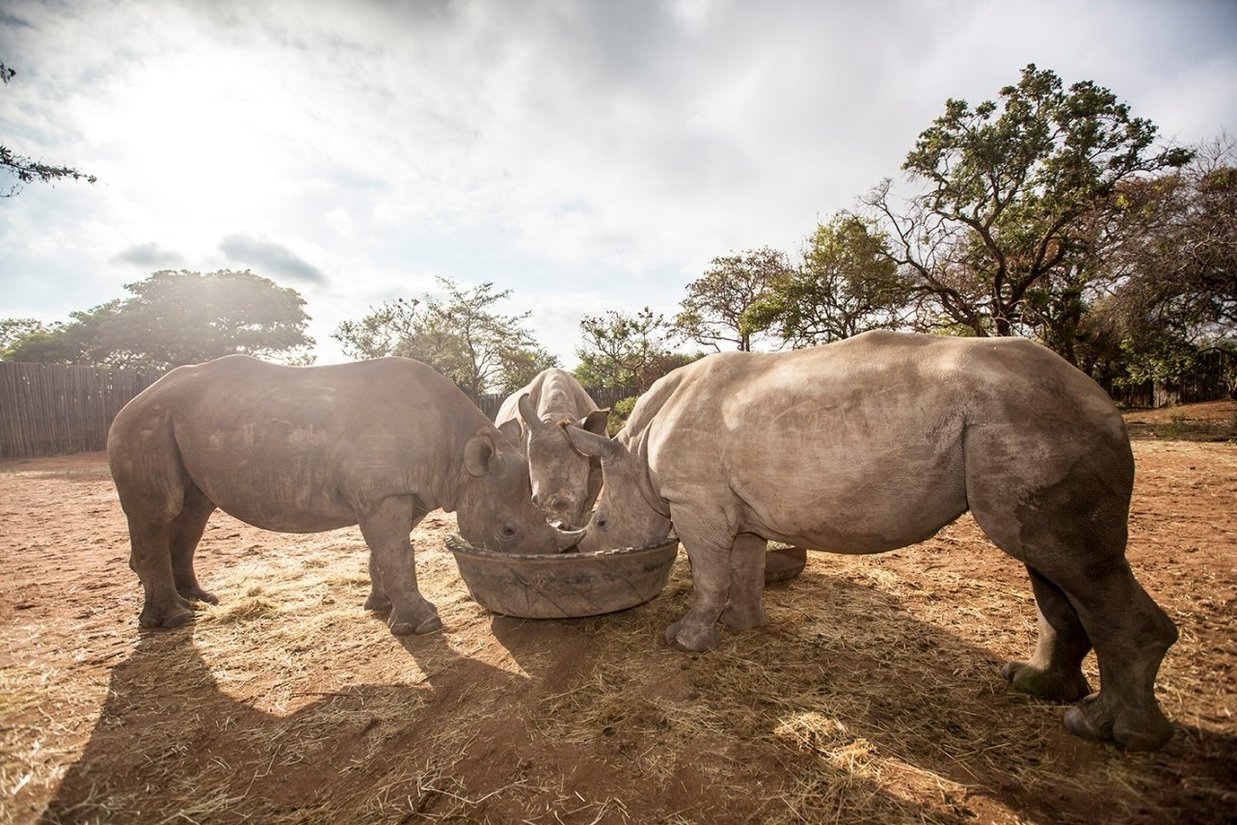 Simone carries on, “The hardest part is seeing them come in so traumatised, and trying to prove to them that it’s going to be okay. It’s not going to be what they’re supposed to have, but we’re going to try our very best to give them as much love as their own mother would have given them if she were alive.”

At this point her lip starts to tremble, and I can see she is fighting back the tears.

I feel my chest tighten, and I corner a tear. And then I move on to other things.

In the last few days living at this sanctuary I saw for myself the unconditional love that Simone and the other young care givers have for these incredible animals. Even on their days off, they can’t stay away, and everyone gets along so well it feels like one big, happy family; the humans, the rhinos, and the regular visits by the warthogs, vervet monkeys and the rare roan antelope.

Out here in the wilderness they live in this little bubble of love and peace, and life thrums at a different tempo. We wake up to the sweet chatter of birds, and we fall asleep to the lullaby roar of lions, and so while I am here I am enjoying it while it lasts, and, I think, healing a little too. 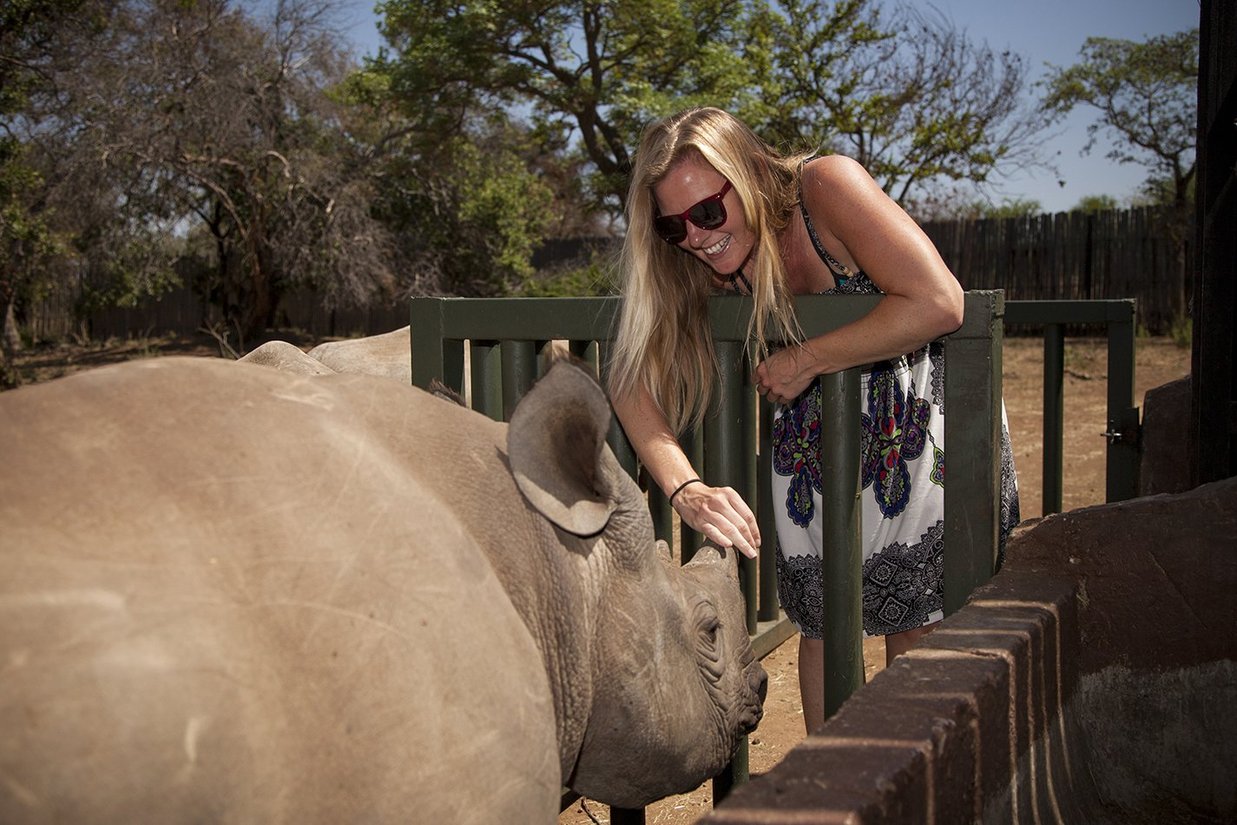 When I leave, my life will once again become a puzzle of stories about corruption and injustice, greed and status, and more dead rhinos - because that’s my job; to seek solutions, and to tell the truth. But sometimes the truth cuts like a knife, and so to come to a place like this, it’s like inhaling a sweet intoxicating life force.

And so now I heal a little, and I borrow courage from the future, because these orphans are the future.

Right now, in this precious moment, I believe what my heart sees.

Jamie Joseph is a writer and environmental activist. She is currently based in various parts of Africa, reporting from the frontline of the poaching crisis. Connect with the world’s thought leaders through savingthewild.com on Facebook and Twitter. This is a guest blog and may not represent the views of Virgin.com. Please see virgin.com/terms for more details.

Have you volunteered at a Rhino Sanctuary, or has this story inspired you to help protect rhino orphans?