Virgin Media O2 has launched its new sustainability strategy, the Better Connections Plan. It sets out the company’s bold and ambitious commitments to use its purpose, people and products to power a better, more connected, and greener future for its customers and communities nationwide.

Virgin Media O2 is helping people to live greener lives in a number of ways including:

Lutz Schüler, CEO of Virgin Media O2, said: “As part of our mission to upgrade the UK, Virgin Media O2 is stepping up for the planet, for people and for future generations with our Better Connections Plan. We will cut carbon faster, champion more sustainable and low carbon tech, tackle e-waste, and provide data and devices to those in need, so everyone can live in a better, more connected, and greener world.” 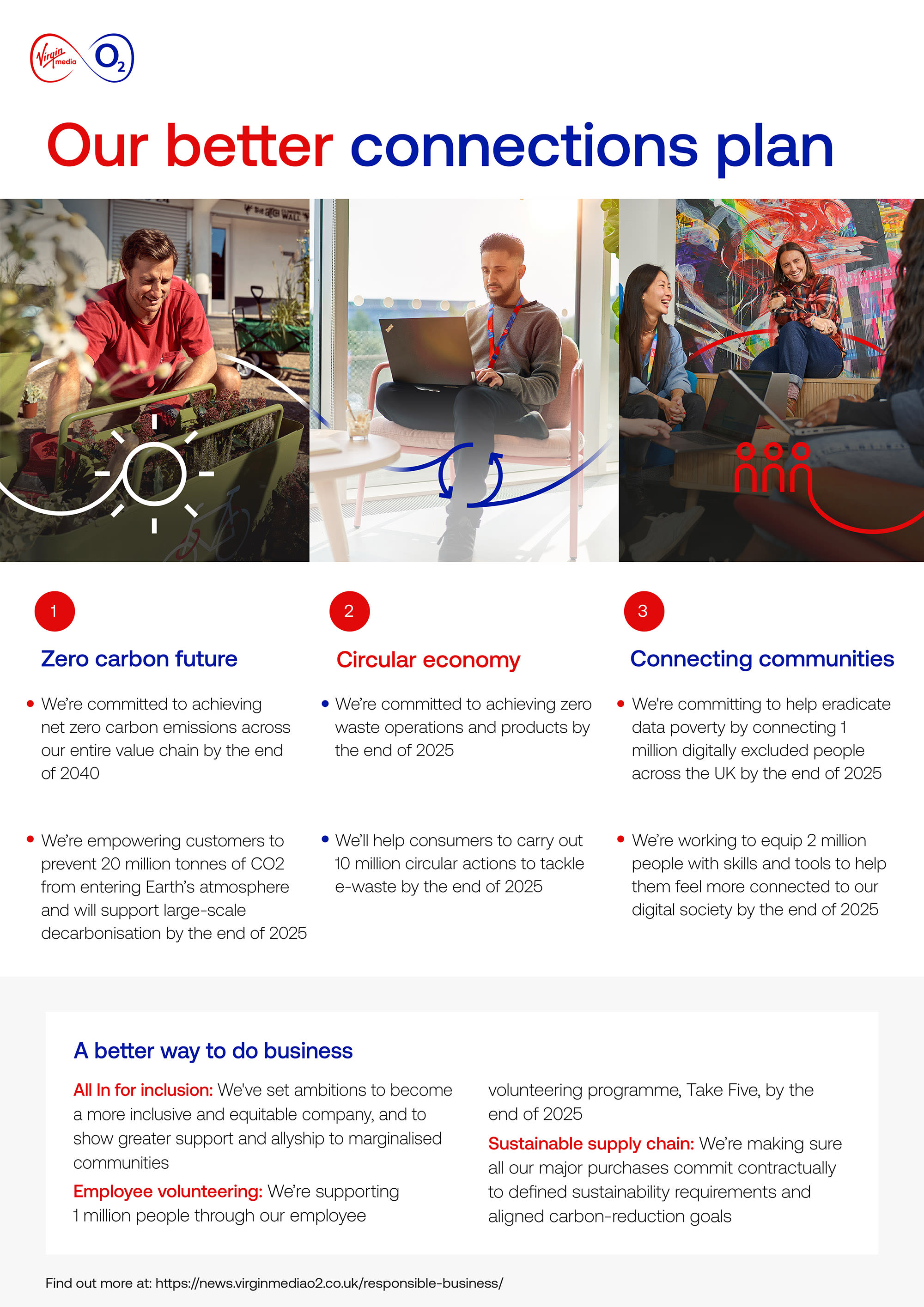 Virgin Media O2 has set an ambitious commitment to achieve net-zero carbon across its operations, products and supply chain by the end of 2040, and is committing to the Science-Based Target Initiative's Net-Zero Standard. As part of this, the company will transition its fleet of more than 4,000 vehicles to electric vehicles by the end of 2030.

Through its gigabit broadband and 5G mobile networks, Virgin Media O2 will power next-generation technology and services that will prevent 20 million tonnes of carbon from entering the Earth’s atmosphere by the end of 2025.

Virgin Media O2 is already doing some great work in encouraging customers to recycle – nine million routers and set-top boxes have been refurbished and reused since 2014. And it has set a target of helping consumers carry out 10 million circular actions by the end of 2025 – whether that’s sustainably recycling devices, returning old kit, or donating unwanted smartphones and tablets to people who need them.

Virgin Media O2 will become a zero-waste business by the end of 2025, ensuring that more than 95% of operational waste is recycled – and the remaining waste that can’t be recycled will go to energy from waste facilities.

By the end of 2025, one million people who are currently digitally excluded will be connected through free and affordable services provided by Virgin Media. This includes measures such as Essential broadband for people who receive Universal Credit, the expansion of the Shared Rural Network to improve rural mobile coverage for communities across the UK, and the National Databank, which was set up by Virgin Media O2 and digital inclusion charity, Good Things Foundation, to tackle data poverty.

Virgin Media O2 also wants to help improve the digital skills and confidence of two million people, expanding its digital skills agenda with Good Things Foundation and continuing to support parents and families to be safer online with Internet Matters.

The Better Connections Plan has launched at the same time as a new campaign, Do One Thing, which is encouraging people to take positive action to protect the planet for current and future generations. Supported by a new Youth Advisory Council – made up of Gen Z activists – and a £500,000 Eco Fund, Do One Thing aims to inspire people to make changes to their lifestyles – big or small – to create a sustained and lasting impact on the environment.

The Better Connections Plan will also champion and support Virgin Media O2’s new diversity, equity and inclusion strategy, All In, to become a more inclusive and equitable company, and to show greater support and allyship to marginalised communities.