On the move: From professional gymnast to Virgin Active manager

On-stage success and sporting prowess define Shaun Gunter. He's the group exercise manager at Virgin Active Wembley Square in Cape Town. He shares what drives him to aim for the top…

Performance has always been in my blood, I’ve always moved in theatrical or sporting circles. I’ve been involved with all sorts of stage work, but there wasn’t ever any order to it – I just jumped from one thing to the next as the opportunities came up.

One of my early roles on stage was as an assistant on a comedic illusionist act, which is how I ended up performing for the Queen in 1995. We were due to perform at Durban Opera Playhouse, and were told by my manager at the time that we were doing something for the Royal Variety show, which was huge. I felt very honoured to be involved. It was a great privilege, and certainly wasn’t something we expected to ever happen.

It was wearing my other hat, as a sportsman, that I had some of my biggest successes though. During my time as a professional aerobic gymnast, I’d have an International Gymnastics Federation (FIG) competition every three to four months, and if my team and I could afford to go and compete internationally, we would. Sometimes we had sponsors – I worked with Fila, Nike and Reebok – but most of the time we had to pay our own way. It wasn’t always the easiest thing to do and it was a very long journey and incredibly hard work, but I loved it. I found it difficult to maintain a full-time job – there was so much time taken up with training, travelling and competitions that there just wasn’t room for anything else. I lived out of suitcases and went where the competitions were.

During the first four years after FIG streamlined gymnastics and sports aerobics as one distinct category, I won the South African Championship four times in a row. I received my national colours, which is a process in itself, and was invited to perform at the awards ceremony. This all happened in a bit of a blur during my late twenties and early thirties – I was pushing myself incredibly hard and wasn’t ever really registering the massive things that were happening to me. If I think back now, it all seems like a dream – I can't believe some of the things I achieved.

As a professional aerobics champion, I was asked to support an HIV awareness tour that Magic Johnson was headlining – this was around the time he revealed he was HIV positive. It was a wonderful opportunity to be able to use my position and professional status to help support an incredibly important cause. 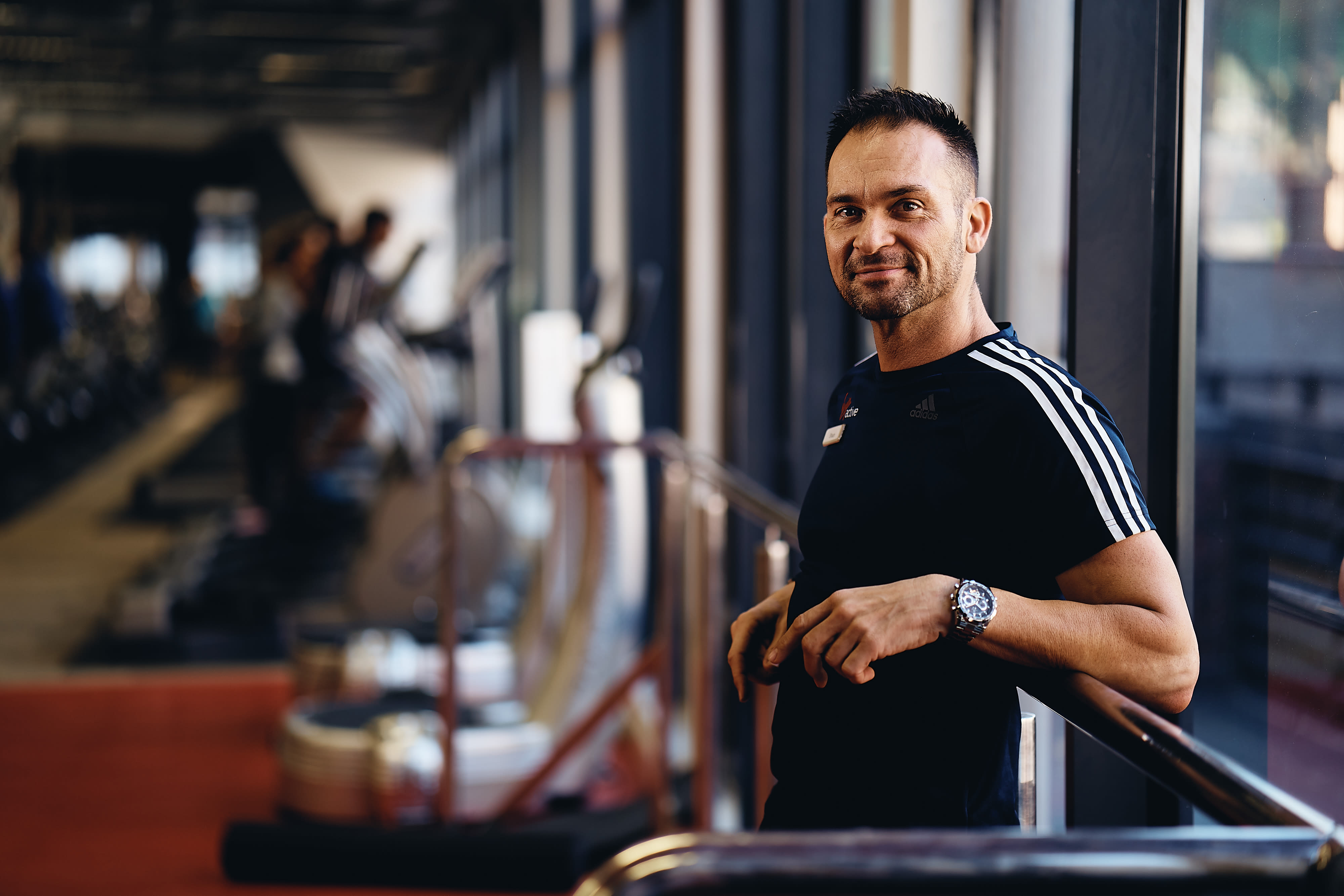 After my professional gymnastics careers ended, I became a trainer on cruise liners. That’s how I ended up meeting Lenny Kravitz – he was onboard and looking for a trainer, and I was asked if I’d like to step up. We did one-on-one yoga training – doing that kind of work is very personal, so I never really had the chance to be star-struck. I was just focused on training him the best way I knew how. I must have done something right as he actually asked me to come and train him while on tour – but I had to turn that down as I was already committed to my job on the ship.

After that I spent 12 years working at another health club as their group exercise manager. I managed a cluster of clubs and enjoyed the work I did, but once Virgin Active arrived in South Africa I just knew I had to work there. I fell in love with the brand and the image, and I knew it was a company I wanted to be associated with.

Virgin Active embraces growth, both in their fitness centres and in the people who work in them. They make me feel validated – the company looks after you and helps you grow. They want you to be the best person you can be, because they know that’s the only way for you to give the best experience back to members.

I’ve recently been on the Learning to Fly programme with 13 colleagues from across South Africa. The programme was designed to help us further our careers as managers. They really lay things out for you and show you the way to achieve all of these amazing things – that’s just the kind of place Virgin Active is.

At weekends, I act as a master trainer for the company, which means that I facilitate workshops for specific classes and courses to help keep current or new instructors in the loop for the latest exercise trends. This is also a great opportunity for me to showcase my love of music and choreography, as I often create my own class templates and playlists to share with the instructors during the sessions.

Part of our 2019 goal is making sure that we all keep our work-life balance in the right place. Even during my downtime I like to research new exercise trends and great new tracks to keep members motivated in my classes. I genuinely enjoy the work I do. Even if I spend my weekends researching, I’m having a good time.

My favourite thing about my job is the members – I love making them happy. Putting something new on the timetable and getting feedback about how much the members have enjoyed it is so rewarding. Last week, I led a class and at the end everyone in the group stood up and said, “Thank you, that was incredible!” People are always so quick to complain but nobody ever says the good things so that’s what I love about my workspace: it really brings out the positivity in people.