Virgin Galactic’s next rocket-powered flight, “Unity 23”, will be the first commercial, human-tended research mission for the company.

The first customer spaceflight of SpaceShipTwo Unity from Spaceport America will focus on microgravity research and carry three customer crew members from the Italian Air Force and the National Research Council. This partnership marks the first mission of its kind led by a European country.

The goal of the mission is to evaluate and measure the effects of the transitional phase from gravity to microgravity on the human body. Other payloads on board will study the effect of the microgravity environment on a range of chemical and physical properties. By testing and evaluating biological and technological responses in sub-orbital flight, the mission aims to produce insights relevant to current and future spaceflight systems and technologies.

The crew will be: 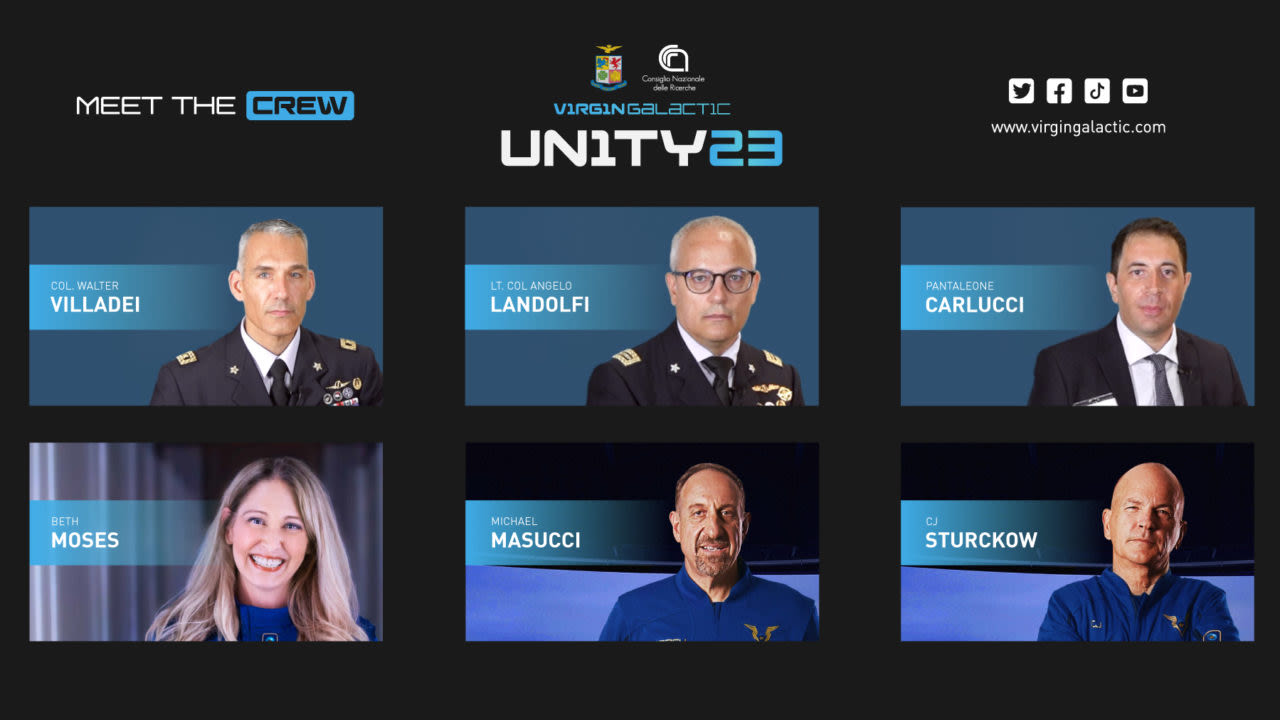 The pilots for this mission are Michael Masucci and CJ Sturckow flying VSS Unity and Nicola Pecile and Kelly Latimer flying VMS Eve.

Virgin Galactic is targeting a flight window as early as late September 2021, pending technical checks and weather. Audiences around the world will be invited to watch the commercial research mission with the Italian Air Force through a live stream available on VirginGalactic.com.

Michael Colglazier, Chief Executive Officer of Virgin Galactic, said: “Being selected by the Italian Air Force to support their microgravity research is a testament to the unique scientific capabilities of our spaceflight system. We’re proud to be facilitating cooperation between spacefaring nations and industry pioneers to expand human knowledge, and demonstrate the intrinsic value of our offering to government and scientific partners. This flight will be remembered as an important milestone in unlocking the transformative potential of repeatable and reliable access to space for years to come.”

Sirisha Bandla, Head of Virgin Galactic Research and Vice President of Government Affairs, said: “The commercial space industry is providing scientific opportunities that were unthinkable a decade ago. By offering routine access to space, with a flight profile that can be tailored to the payloads on board, we are offering novel prospects for researchers to conduct microgravity science and technology development. We’re proud to be ushering in a new era in human-tended spaceflight research and helping the Italian Air Force build on their 60-year legacy in space innovation.”

Lieutenant General Alberto Rosso, Chief of Staff of the Italian Air Force, said: “The Italian Air Force has always placed great importance on the understanding of space and aerospace. Aerospace is the natural operational extension of our institutional duty. Strength in this domain is an asset for the Country and is critical to its protection and safety, which is why the Air Force places great emphasis on further deepening its knowledge. With this mission, the Italian Air Force aims to start exploring potential implementations for this kind of vehicle - both civilian and military - and to further opportunities for technological, scientific and industrial growth. We are thrilled to entrust this important mission to a flight pioneer such as Virgin Galactic.”