Virgin Books
by Asher Harris
There is no other company like Netflix.

It has led a revolution in the entertainment industries, capturing the imaginations of hundreds of millions of people in more than 190 countries.  But to reach these heights, Netflix - which launched in 1998 as an online DVD rental service - had to reinvent itself until it found success.

No Rules Rules, from Virgin Books, tells the story of Netflix’s creation, co-authored by Netflix CEO Reed Hastings, and Erin Meyer, one of the world's most influential business thinkers.

Read an excerpt from the book below, where Reed talks about how the leadership at Netflix understood the market, and how that allowed them to pivot and achieve amazing success.

“Blockbuster is a thousand times our size,” I whispered to Marc Randolph as we stepped into a cavernous meeting room on the twenty- seventh floor of the Renaissance Tower in Dallas, Texas, early in 2000. These were the headquarters of Blockbuster, then a $6 billion giant that dominated the home entertainment business with almost nine thousand rental stores around the world.

The CEO of Blockbuster, John Antioco, who was reputed to be a skilled strategist aware that a ubiquitous, super-fast internet would upend the industry, welcomed us graciously. Sporting a salt-and-pepper goatee and an expensive suit, he seemed completely relaxed. By contrast, I was a nervous wreck. Marc and I had co-founded and now ran a tiny two-year-old start-up, which let people order DVDs on a website and receive them through the US Postal Service. We had one hundred employees and a mere three hundred thousand subscribers and were off to a rocky start. That year alone, our losses would total $57 million.

Eager to make a deal, we’d worked for months just to get Antioco to respond to our calls. We all sat down around a massive glass table, and after a few minutes of small talk, Marc and I made our pitch. We suggested that Blockbuster purchase Netflix, and then we would develop and run Blockbuster.com as their online video rental arm. Antioco listened carefully, nodded his head frequently, and then asked, “How much would Blockbuster need to pay for Netflix?”

When he heard our response – $50 million – he flatly declined. Marc and I left, crestfallen. That night, when I got into bed and closed my eyes, I had this image of all

sixty thousand Blockbuster employees erupting in laughter at the ridiculousness of our proposal. Of course, Antioco wasn’t interested. Why would a powerhouse like Blockbuster, with millions of customers, massive revenues, a talented CEO, and a brand synonymous with home movies, be interested in a flailing wannabe like Netflix?

What did we possibly have to offer that they couldn’t do more effectively themselves? But, little by little, the world changed and our business stayed on its feet and grew. In 2002, two years after that meeting, we took Netflix public. Despite our growth, Blockbuster was still a hundred times larger than we were ($5 billion versus $50 million). Moreover, Blockbuster was owned by Viacom, which at that time was the most valuable media company in the world. 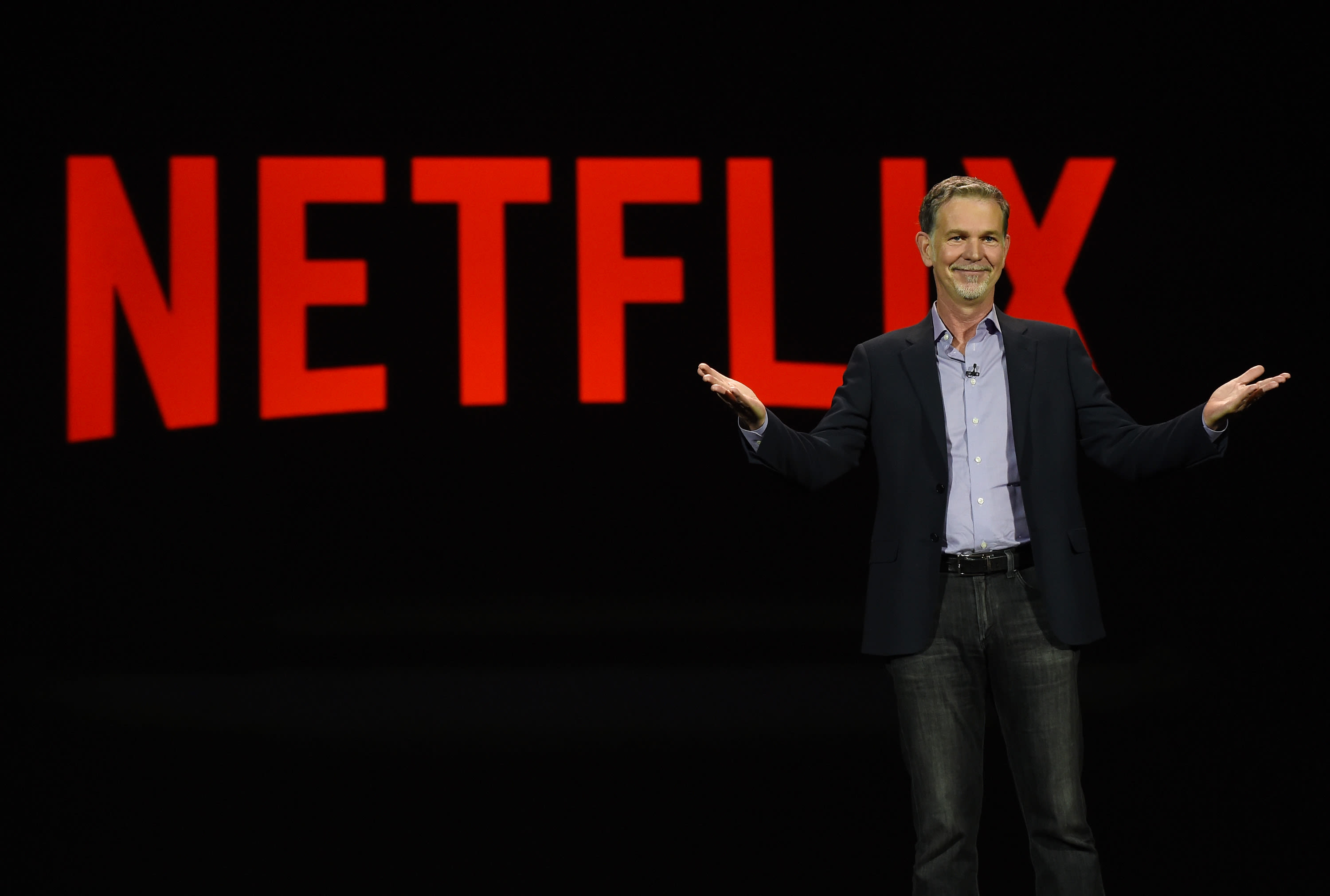 The year 2019 was also noteworthy for Netflix. Our film Roma was nominated for best picture and won three Oscars, a great achievement for the director Alfonso Cuarón, which underscored the transformation of Netflix into a full-fledged entertainment company.

Long ago, we had pivoted from our DVD- by-mail business to become not just an internet streaming service, with over 167 million subscribers in 190 countries, but a major producer of our own TV shows and movies around the world. We had the privilege of working with some of the world’s most talented creators, including Shonda Rhimes, Joel and Ethan Coen, and Martin Scorsese. We had introduced a new way for people to watch and enjoy great stories, which, in its best moments, broke down barriers and enriched lives. I am often asked, “How did this happen? Why could Netflix repeatedly adapt but Blockbuster could not?” That day we went to Dallas, Blockbuster held all the aces. They had the brand, the power, the resources, and the vision. Blockbuster had us beat hands down.

It was not obvious at the time, even to me, but we had one thing that Blockbuster did not: a culture that valued people over process, emphasized innovation over efficiency, and had very few controls. Our culture, which focused on achieving top performance with talent density and leading employees with context not control, has allowed us to continually grow and change as the world, and our members’ needs, have likewise morphed around us.

Netflix is different. We have a culture where No Rules Rules.

No Rules Rules by Reed Hastings and Erin Meyer is published by Virgin Books and is available now.

The Extra Hour: Reclaim time to do the things you love

Tiny Habits: How to make resolutions that will last