You might not expect someone who once sat on the board at KFC to start a social enterprise looking to tackle the youth obesity problem. But that’s exactly what Chris Holmes has done.

He took a Start Up Loan from Virgin StartUp to help fund SMASH, the app that gives young people discounts on healthier food options. We caught up with him to find out more.

What did you do before launching SMASH?

I spent the first 10 years of my career working in boring stuff like corporate finance and private equity advisory, and advising companies on buying other companies. Then I did an MBA at London Business School about 10 years ago, where I heard about these things called customers for the first time. It was like, 'oh wow! This sounds way more exciting than moving money around!' And I wanted to get involved and become someone who might one day run a business.

After that, I joined the health and beauty retailer Boots. Relatively quickly I moved over to trading where I ran about £250 million worth of category profit and loss (P&L) – things like vitamins, footcare, family planning, incontinence products. But also, the behavioural change categories including stop smoking and weight management. These were really fascinating to me because they were all about behavioural change and why people do the things that they do, why they get into these bad habits and how retailers can help them in the context of products, advice and services.

When I left Boots, I joined KFC as commercial finance director – at the time the job offer arrived I was also a vegetarian, so I think everyone I’d ever known was a bit confused by that move. Everything was beige, the menu was beige, the floor tiles were beige. But I was like, ‘What if it could find a bit of swagger? What if it could launch a vegan burger?’ In full transparency it didn’t take me long from there to start eating meat again – the chicken was too good to resist.

Very quickly I felt frustrated because we were trying to make pricing decisions without data. At Boots, I had the customer data from Advantage Card. But at KFC I didn't know who our customer was, so I didn't know how they'd react if we put the price of a Zinger burger up by 25p. So I said, 'Why don't we launch the KFC version of Advantage Card?' And that’s what we did – I had the opportunity to lead the launch of the Colonel’s Club, KFC’s digital loyalty platform.

And how did that lead to you coming up with the idea for SMASH?

While at KFC, I became the chief development officer and joined the board. I was responsible for franchisee policy and recruiting new franchisees but also trying to open as many KFCs throughout the land as possible. We went from opening about 10 a year in 2015 to about 45 in 2019. And it might surprise you to know that not everyone wants a KFC to open next to their house.

I would often have to get involved in the local community conversations. And this is really where the two worlds started to meet, my Boots days and my KFC experience really started to come together. I could answer questions about smell or antisocial behaviour, or litter (KFC have done loads of great work in these areas). But the question that started to come up more often when trying to open a KFC close to a school was, ‘Aren’t you going to make the kids fat?’ It was as blunt as that and that was a hard question to answer, even with the great progress our marketing team had made with KFC’s nutritional commitments.

In this role I was also often involved in things like sugar tax consultations, and ad bans on Transport for London real estate. And in May 2019, the Mayor of London was trying to ban all new takeaways from opening anywhere near a school. Because there are so many schools in London, it was basically a blanket ban.

And that's when I had my 'aha!' moment. It was this crazy day where I was sitting in a courtroom in City Hall against the Mayor of London and his team, Public Health England, Diabetes UK, Cancer Research, Guys and St Thomas' Hospital, School Food Matters, all these guys on one side of the room trying to make sure this policy goes through. And then on the other side of the room was me and some poor guy from McDonalds, and that was it.

I was reflecting on the day with the guy from McDonalds and we realised that what was wrong with the system was that on one side of the room you have well-intended, well-educated lobbyists and regulators, who know that there's a youth obesity problem. On the other side of the room, you've got the people who run the food environment. And the two sides are not talking to each other, they're fighting each other, they're undermining each other, they're spending money on lawyers and  research reports that try to suggest that the other side has got it wrong. No-one was working together on a genuine solution that could change today’s food environment. So I began to wonder what would happen if you put all of that energy into a solution where everybody could get around the same table to discuss. I had a few ideas and I went to speak with Paul Lindley, founder of Ella's Kitchen and chairman of the Mayor of London's obesity taskforce. I took some ideas to him – one of which was like a young person's railcard for healthier food, which has now become SMASH.

So how did you take it from an initial idea into launching an app?

I left KFC to become the managing director of Ask Italian in summer 2019. That was going pretty well until March 2020 when I had to shut 110 restaurants and furlough 2,500 people due to the pandemic.

And this gave me the opportunity to start thinking about the idea again. When people were learning new languages and going for runs, I had this idea burning in the back of my head. I spoke to Paul about it and he encouraged me to write it down. So I did and I got talking to people at Guys and St Thomas' Hospital charity, who are the godfathers of the fight against youth obesity. I had a really sketchy one pager, which I showed to them and they both challenged it and loved it. They gave me £35,000 to research it and build a prototype of the app. 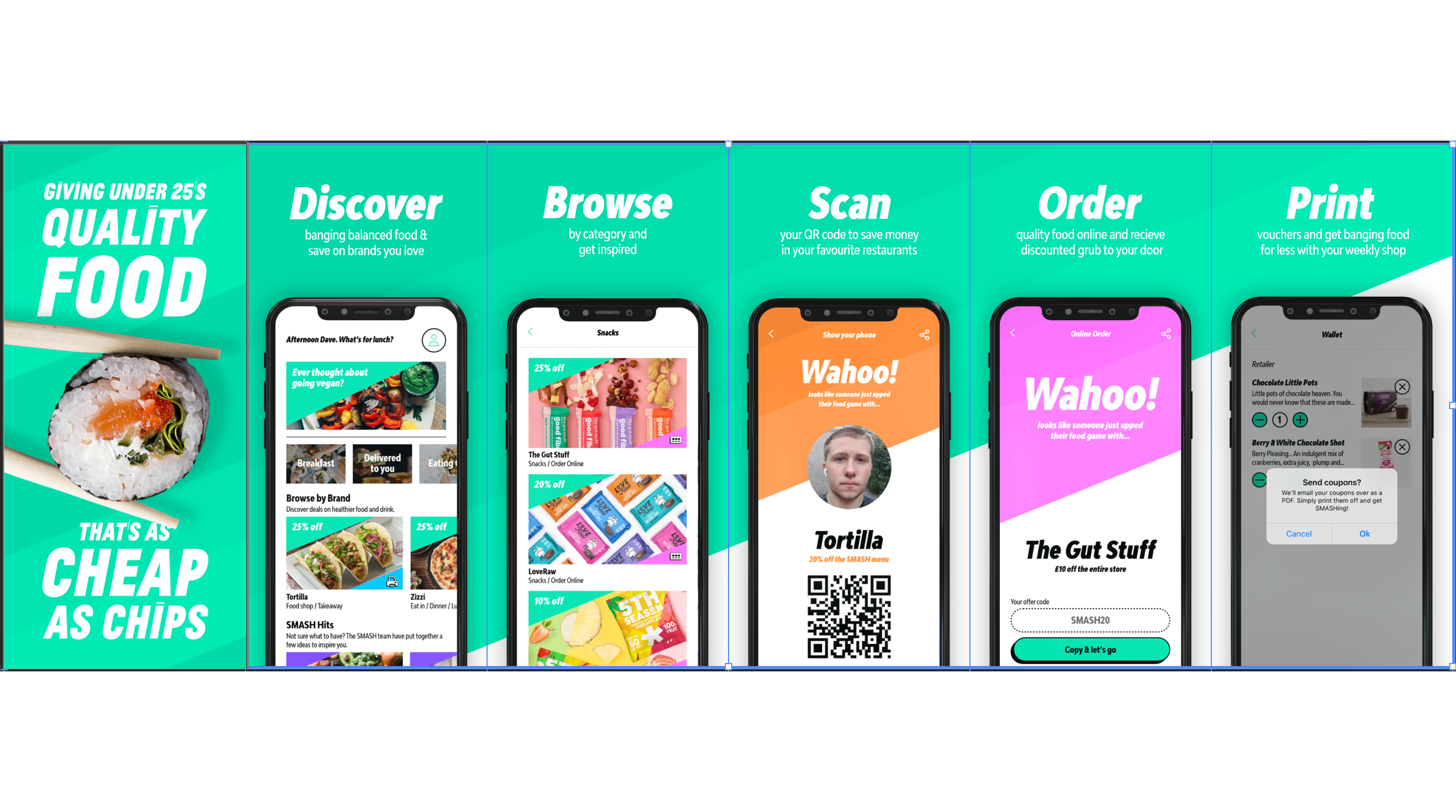 I worked with a marketing agency that I knew and we came up with this concept called SMASH, which stands for ‘save money and stay healthy’. We built the prototype, which we showed Guys and St Thomas'. They came back with a 100-page research report that said it looked amazing. And that was the start of the journey.

So then I started building the team and wrote an actual business plan. I met a tech agency, who were introduced to me by my Virgin StartUp mentor. We were about to sign a contract with someone else but my mentor Ollie Collard told me I had to meet with these guys, who were founded by one of the original founders of WhatsApp. They built Olio, a food sharing app, and they wanted to build the SMASH app for us. They had a really fresh approach so we went with them. So £20k of the £25k I'd borrowed from Virgin StartUp went to the tech agency before we'd even raised any seed funds. And now we’ve launched the app in the app stores and it’s out there in the world.

Did you ever think that you would start your own business?

Yes, in a way. I was always a little bit of a closet entrepreneur and trying to find ways to do that in big businesses. Obviously starting the Colonel's Club at KFC is a great example of that.

But even going back to university, I founded a society called Free Spirits, which was kind of like Time Out or Design My Night. I went round the bars in the local area and put together a load of deals for members. So I knew back then that I wanted to do something in this space. I fell into a corporate ladder, which I don't regret at all – it was an amazing grounding.

Even when I was at Ask Italian, I would still drop into London Business School where I did my MBA. In February 2020, they were running a course called Entrepreneurship for Grown-ups. It was an hour-long lecture in the evening. And this lecturer was saying that anybody can start a business, absolutely anyone. In many ways, entrepreneurship seems to be stereotyped as young, confident people without much to lose. But actually a lot of the successful entrepreneurs start businesses later in life, when you've got networks. Not to say that you couldn't or shouldn't do it when you're young – you absolutely must, it's how you learn. But don't underestimate yourself, just because you've got more to lose, sometimes that means that you've got savings to invest to get you started, you've got networks to support you, you've tried things in a corporate entrepreneurial environment so you have a sense of what will work.

I think what's really interesting is that I've realised it's all about the journey. It's about making something happen that didn't happen before, and that is as rewarding as the corporate paycheque. So whatever else happens, we launched SMASH last week and Richard Branson tweeted about it. Whatever happens next, we've got to a point where we can be proud.

Got a great idea for a business? Head over to Virgin StartUp for support and advice.