Virgin Galactic’s second spaceflight – and the first Scot in space!

Delighted that Virgin Galactic’s spaceship, VSS Unity, reached space for the second time today – going higher and faster towards the dream of creating thousands of private astronauts from every corner of the globe. I was gutted that I couldn’t be there on the flightline to celebrate with the team, but I had already committed to being in Colombia to help organise a concert, Venezuela Aid Live, to raise funds for the humanitarian crisis in Venezuela. More on that later.

I had been in Mojave a few days earlier, when the flight window opened, but unfortunately the weather wasn’t cooperating. I couldn’t be prouder of the team - there was another exciting first for Virgin Galactic as Chief Pilot Dave Mackay became the first Scottish-born astronaut. Dave, an ex RAF test pilot and Virgin Atlantic Captain who I’ve known for many years, was joined by pilot Mike “Sooch” Masucci. They have both completed a rocket powered test flight before, but this was their first spaceflight together – congratulations!

Spaceship VSS Unity also carried an additional member on board, Beth Moses, Virgin Galactic’s Chief Astronaut Instructor. Beth, who has been overseeing my own training, is an expert micro-gravity researcher and flew in the cabin as the third crew member and is the first woman to fly on board a commercial spaceship. Her role was to provide human validation for some of the data that has been collected by sensors on previous flights and verify specific physical elements of the cabin interior. Beth will make sure that our customer journey is as flawless as the spaceship itself. 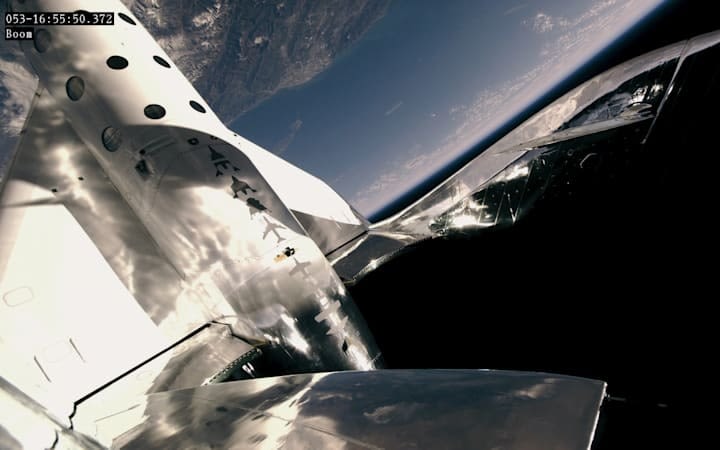 The crew enjoyed extraordinary views of Earth from the black skies of space and, during several minutes of weightlessness while the pilots “feathered” the spaceship in preparation for a Mach 2.7 re-entry, Beth floated free to complete her test points.

VSS Unity flew a little higher and faster than ever before, with the world record-holding hybrid rocket motor, propelling the spaceship at Mach 3.04 to an apogee of 295,007ft. It also carried payloads from the NASA Flight Opportunities program, which meant this was our second revenue generating flight.

The spaceship then glided back home with a smooth runway landing and enormous cheers from the crowd on the flight line.

Today just heightens the huge sense of anticipation and excitement for all of us who are looking forward to experiencing space for ourselves. The next few months promise to be the most thrilling yet. Keep up to date by following Virgin Galactic's social channels.