My first airline was started out of frustration. As a young record executive, I travelled the world flying by other airlines, but found the experience dreadful. So in 1984 I chartered one second-hand Boeing 747 and offered flights between London and New York. People thought we were mad and bound to fail quickly. Instead, we focused our airline on the touches so many travellers were looking for: better food, better entertainment, flat beds in Upper Class. And we built a loyal following. That airline was Virgin Atlantic, and today it is still thriving when nearly all of its original rivals have gone under.

We have done the same in Australia, where 16 years ago we set up Virgin Blue to challenge the dominant position of Qantas and provide a much better service for the travelling public. We approached building the airline in the same way with wonderful crew and better value flights. Now Virgin Australia provides real competition across the board to Qantas.

Our US airline, Virgin America, also started out of frustration. As more airlines consolidated and grew larger and more focused on the bottom line, flying in the US became an awful experience. Despite moves to block our airline from flying, Virgin America began service in August 2007 - with the goal of making flying good again. 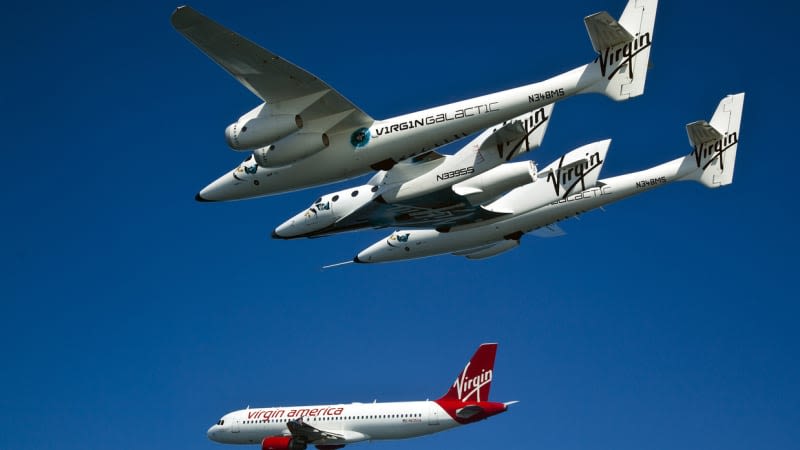 Virgin America became the first airline to offer fleetwide WiFi, soothing mood lighting, touch-screen seatback entertainment, an on-demand food ordering platform, and power outlets at every seat on every flight. Our unique and stylish product and brilliant customer service have won every major travel award. The airline has also done something almost inconceivable in the airline industry: Virgin America won the hearts and fierce loyalty of consumers around the country. People love this airline.

Guests on Virgin America are offered more choice and control and friendly customer service in an otherwise demoralising commercial airline environment. Flying is no longer a dreaded chore: it is something to look forward to. Virgin America has brought new competition, lower fares and a focus on creating an enjoyable in-flight experience to the US. Our innovative, stylish, guest-focused product and experience (and even our safety video) have made such an impact that our little airline forced the big legacy airlines to step up and find ways to compete - including by updating their fleets after years of ignoring customers. Airports where competition was stifled and prices prohibitively high – in cities like Dallas, Newark, Chicago and Denver – have opened up and customers have more choice. Because of Virgin America, the industry finally had to consider the customer.

The commitment to create a truly guest-focused airline and the dedication and will to make it happen – through some of the most challenging economic times and anti-competitive obstacles – has resulted in a financially successful business that achieved record profits last year. But the real winner is the customer. Today, the flying public has lower fares and better options. When Virgin America launched, fleetwide WiFi was considered a radical idea, and so was touch-screen entertainment at every seat, and brand new and beautifully designed cabins. Airlines have had to invest in better products to try to compete. That is a testament to the entire Virgin America team.

In 2007, when the airline started service, 60 per cent of the industry was consolidated. Today, the four mega airlines control more than 80 per cent of the US market. Consolidation is a trend that sadly cannot be stopped. Likely feeling the same competitive pressures as Virgin America, Alaska Airlines approached Virgin America with a proposal to merge. The board of Virgin America has accepted an offer from Alaska, and if the merger is approved by Virgin America shareholders and regulatory authorities, the two airlines will become one.

I would be lying if I didn’t admit sadness that our wonderful airline is merging with another. Because I'm not American, the US Department of Transportation stipulated I  take some of my shares in Virgin America as non-voting shares, reducing my influence over any takeover. So there was sadly nothing I could do to stop it.

Our Virgin airline has much more to do, more places to go, and more friends to make along the way. The important thing now is to ensure that once Alaska witnesses first-hand the power of the brand and the love of Virgin America customers for our product and guest experience, they too will be converts and the US traveling public will continue to benefit from all that we have started.

As an entrepreneur, I’ve had the privilege of being among brilliant people who as a team create something extraordinary and purposeful. And it is truly a privilege to find yourself in the right place and time with the kind of team that can make a lasting contribution. So I am incredibly proud of Virgin America’s 3,000 teammates and what they have accomplished: a strong alternative choice for flyers who rightly expect a better experience. Without the radical belief that they could create an airline people actually love, the US airline industry might not be where it is today. The brand’s mission attracted truly exceptional people who refused to create a boring airline. That took a lot of hard work and commitment from Virgin America’s teammates. I have learned about brilliant customer service through their training program, made surprise visits to their headquarters, asked Las Vegas’ McCarran Airport to let our teammates play music again in our check-in area, and have participated in nearly every single route launch. I have jumped off a Vegas hotel on a very windy afternoon, lassoed Texas Longhorn cattle on a tarmac to launch Dallas flights, walked barefoot with a surfboard through SFO’s Terminal 2 to celebrate service to Hawaii, and talked with countless fans and media through live interviews powered by their reliable onboard WiFi - all because of my belief that the Virgin brand can make flying fun again and my belief in the vision and strong values of the airline and its team.

Despite the turbulence and head winds, the journey remains thrilling and joyful, and I look forward to more future flights with Virgin America. Thank you for choosing Virgin America!

Explore Virgin's timeline to find out more about the history of Virgin.