Virgin Money Giving is 100 per cent not-for-profit – it does not make any profit on any donations and never will.

Virgin Money has also announced it will cover the platform fee for Virgin Money Giving for the remainder of government lockdown.

Here’s how Virgin Money Giving was created and how it works.

In 2009, I was training to run the London Marathon, the biggest fundraising event in the world, which Virgin Money were sponsoring. At the time, one player dominated the online fundraising industry. In a sector where the entire purpose is to make the most of the money raised for good causes, it operated with a for-profit business model and charged hefty five per cent fees. Virgin Money wanted to disrupt this market by providing a not-for-profit alternative that challenged the status quo. 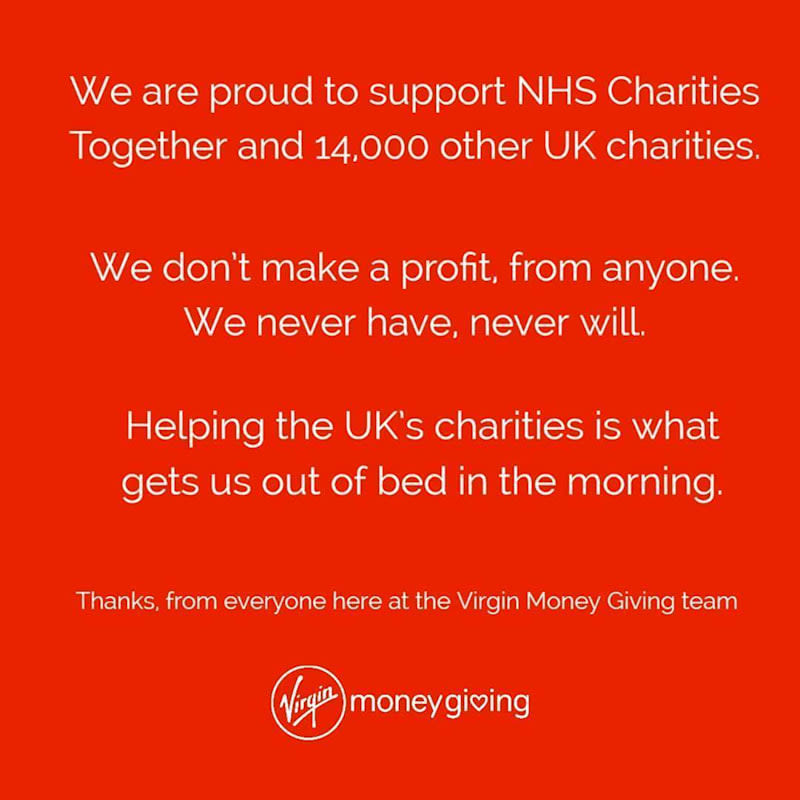 It also turned a one-day event into an entire online fundraising network that creates impact 365 days a year. This approach to a sponsorship opportunity was truly innovative and embodies the best that business can bring to charity. As a result, Virgin Money Giving has also forced some of our competitors to slightly reduce their fees, though they still operate for-profit.

This means that Virgin Money Giving has raised tens of millions of additional funds for charities, compared to if fundraisers had used for-profit platforms. All hard-earned donations go directly to where they are needed most: to the cause. And to top it off, in the true spirit of our wonderful team at Virgin, charities are given the tools and information they need to run effective fundraising campaigns.

These include the incredible Clap For our Carers campaign, which has already raised more than £27 million, the amazing Run For Heroes campaign, and the newly launched 2.6 Challenge, which is calling on everyone to help save the UK's charities.

Virgin Money joined forces with CYBG in 2018 to create the UK’s sixth biggest bank, and Virgin Money Giving is now part of this wonderful team.

Virgin Money Giving doesn’t make a profit on any donations – and it never will.