Much has been written and said over the past few weeks about the horrific decision by Brunei’s ruler, Sultan Hassanal Bolkiah, to introduce a harsh form of Sharia law which includes the death penalty by stoning for same sex-relations, among other draconian forms of corporal punishment.

The news was quickly condemned around the world, by the UN, by governments, civil society organisations and business.

As part of the public outcry, calls for a global boycott of the Dorchester Collection, a group of luxury hotels owned by Brunei’s sovereign wealth fund, quickly gained traction. Many global businesses have supported the boycott or pledged to stop doing business in and with Brunei. Virgin Australia, among others, cancelled an employee travel agreement with Royal Brunei Airlines.

The introduction of a stricter form of Sharia law in Brunei is not a new development. The country’s plans first became public in 2014, and the condemnation was widespread and swift. At Virgin, we decided back then to no longer do business with the Dorchester Collection – a ban we’ve upheld since, as a matter of principle that reinforces our commitment to LGBT+ rights everywhere. 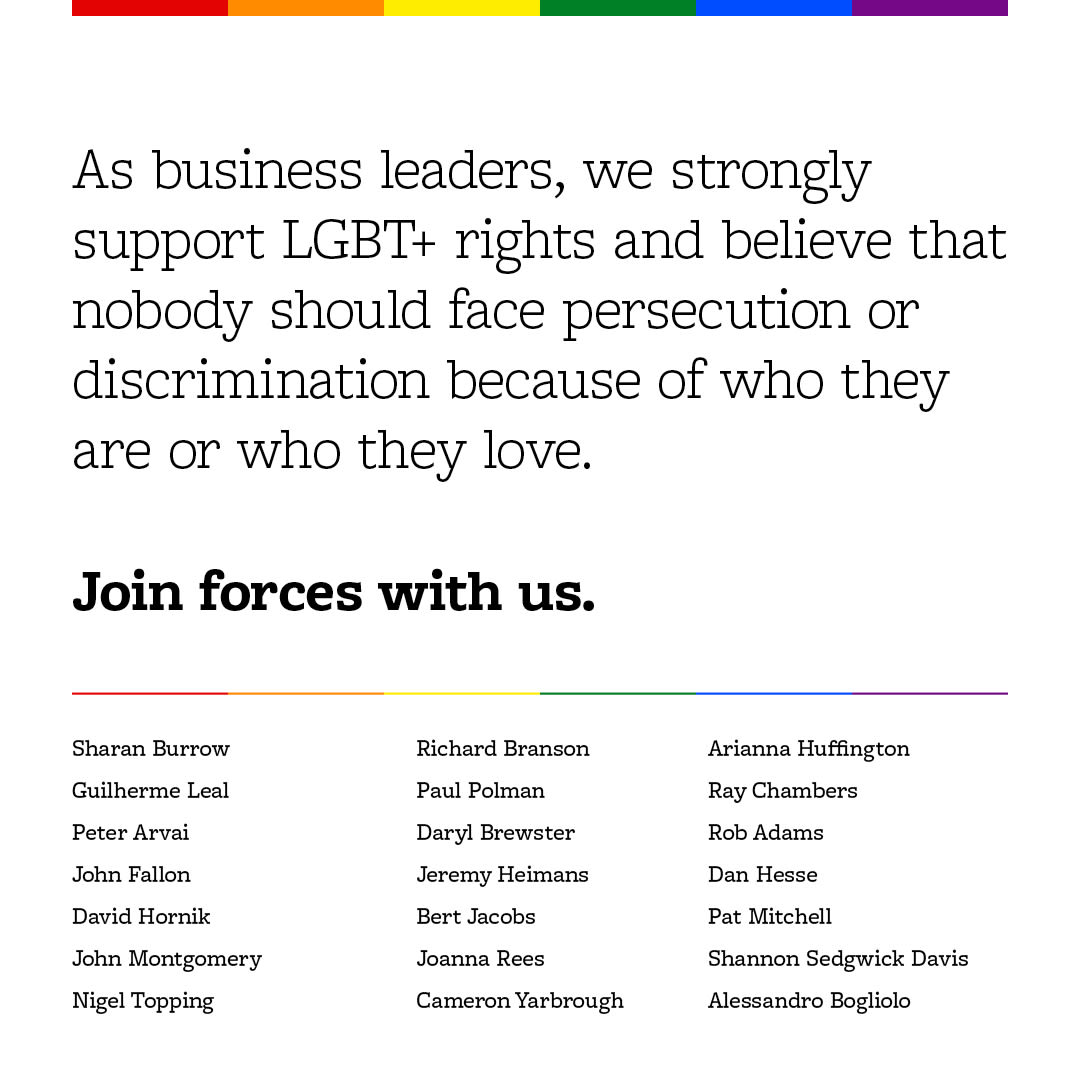 Image from Open For Business

But the debate about Brunei also raises the question of priorities. Scores of countries continue to marginalise, criminalise and persecute LGBT+ populations. Both Saudi Arabia and Iran have executed gay people in recent years, whilst Brunei has not seen any executions since the 1950s. Why take action now?

While some say the chances of Brunei’s new penal code being applied are quite low, I am worried about the message of rejection, repression and hate it sends to LGBT+ communities far beyond Brunei’s borders. In recent days, LGBT+ members in the Virgin family have shared how difficult and deeply hurtful it is to read the news from Brunei. To be so aggressively singled out for being who you are and for who you love cuts very deep wounds. It also brings back dark memories for those who spent decades fighting hard for their freedom to love and live, and for the legal protections they now enjoy.

Of course I am particularly worried about the LGBT+ community in Brunei, who have good reason to fear that the law will – at the very least – drive them into hiding, possibly even exile. While there’s hardly any help available inside the country, allies are not far away. Singapore’s leading gay rights group, Oogachaga, has set up a hotline and WhatsApp channel that offers emotional support to Brunei’s LGBT+ community. It’s an important lifeline we all should share and support. 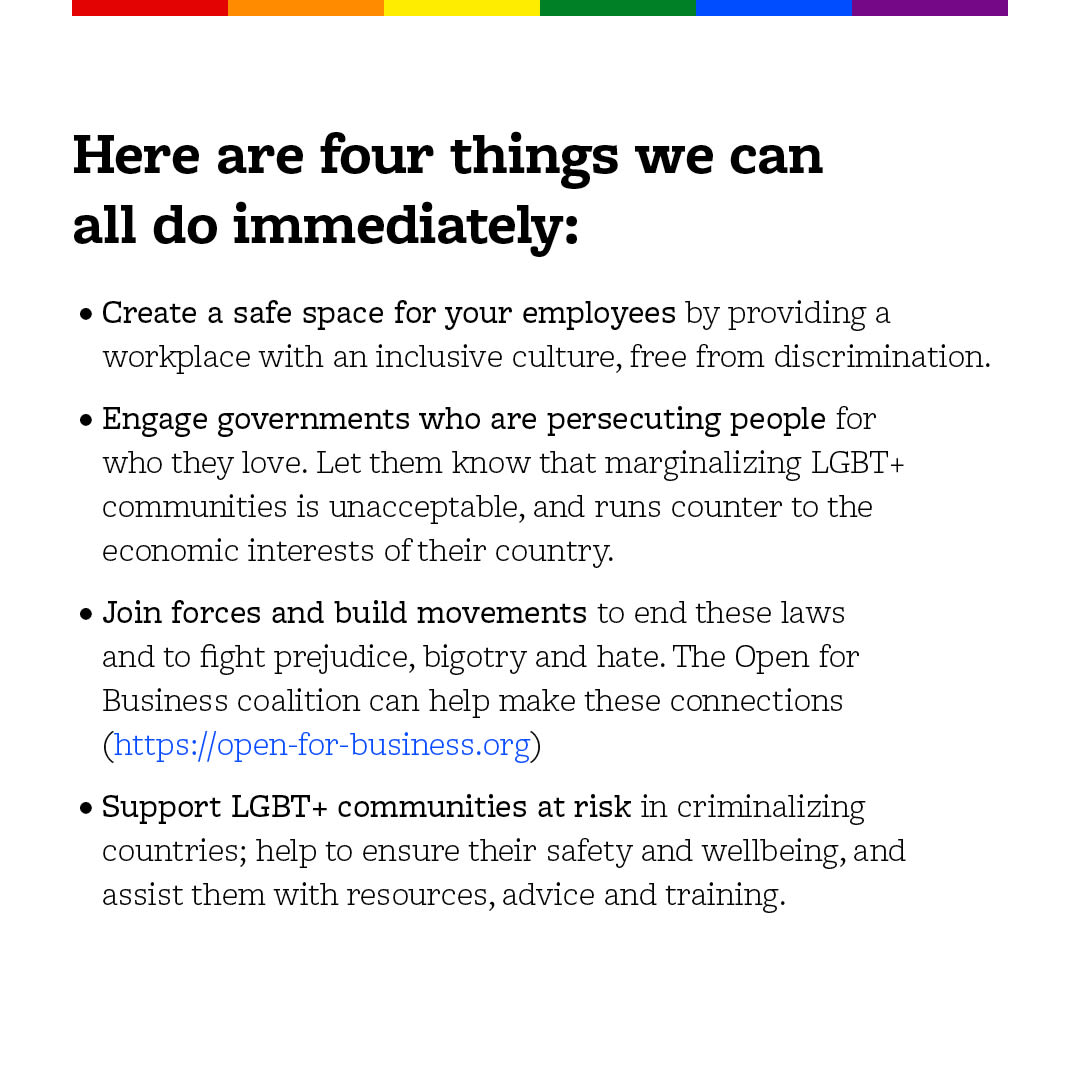 Image from Open For Business

Virgin doesn’t have operations in Brunei, yet that is no reason to remain silent. Any company doing business in the country should stand up for the value and principles it holds dear. Here are some of ours: universal human rights, abolition of the death penalty, freedom from discrimination and persecution, diversity, and inclusion. Those with a presence in Brunei should signal that their offices are places where LGBT+ employees can feel safe, offering at least some measure of support and comfort in a difficult environment.

What Brunei and many other countries need most, however, is a public and more constructive conversation about LGBT+ rights and the power of inclusion. Business must be an important part of that conversation. From the perspective of employers and investors, there’s a positive and compelling case to end discrimination and open up. Brunei is no exception. As the country has seen its oil and gas revenues decline through the years, it must find ways to secure its long-term prosperity and sustainability. Building and maintaining competitiveness in the global market will be critical, and inclusive, free and open societies are an integral part of that. This is an important message for business leaders to send.

Virgin is proud to be a founding member of Open for Business, a wonderful platform that was set up specifically to fill the void and build and champion the business case for LGBT+ inclusion. Its most recent Channels of Influence report provides useful guidance for businesses interested in a more in-depth conversation on the best course forward. Demonstrating that LGBT+ inclusion is a win-win proposition for both business and society may indeed be a good starting point to effect the lasting change we should all be seeking, in Brunei and elsewhere.

Alongside many others, I have signed a letter urging business leaders to stand up for the freedom to love, and to take five immediate steps to support LGBT+ rights.