The death penalty is in retreat. And business leaders are joining the growing movement to end it. Today, I’m pleased to join a global group of executives, supported by the Responsible Business Initiative for Justice, in launching the Business Leaders’ Declaration Against the Death Penalty, highlighting the case for abolition, calling on governments to end the practice, and inviting business leaders everywhere to join the effort. Our goal is to build a global business movement for abolition, ready to raise its collective voice whenever needed.

I’ve never made a secret of my opposition to the death penalty. I think it is inhumane and barbaric, fails to deter or reduce crime and is disproportionately used against minorities and other vulnerable and marginalised groups. Capital punishment cases are also prohibitively expensive, especially when compared to the cost of a life sentence. In the US and elsewhere, the death penalty is an enormous waste of public resources, especially when alternatives are available.

Truly terrifying, however, is the death penalty’s appalling rate of error. Since 1976, when the US Supreme Court lifted a previous ban on executions, 185 innocent people have been freed from US death rows. That’s 185 personal stories of suffering, agony, injustice, and lives shattered. Stories like that of Anthony Ray Hinton, who spent 28 excruciating years on Alabama’s death row, convicted for a crime he didn’t commit. Why would anyone think a system so flawed and broken is a good idea?

As we are developing a better understanding of the death penalty’s failures, we are also beginning to see what it really represents: the world over, the death penalty has been an instrument of racism, oppression, and intimidation. In the US, my friend Bryan Stevenson, a brilliant campaigner for racial justice and human rights, summed it up quite pointedly: “We moved lynchings from outside to inside and brought them into the courtroom.” The death penalty can no longer hide its rotten roots.

Today’s mobilisation of business leaders shouldn’t come as a surprise. Increasingly, consumers, employers, and investors expect businesses and their leaders to take a stand on critical issues of our time. If business can lobby for its own good, the argument goes, it must also be a lobbyist for the greater good of humanity.

In the case of the death penalty, the business case for engagement is obvious. As a biased and inherently unjust form of punishment, it runs counter to the ideals of good governance, social cohesion, transparency and fairness – all factors considered critical to long-term business success. Where governments hide or obscure the origin of lethal injection drugs, for instance, businesses have good reason to wonder about commitments to private contracts.

Where people of colour and the poor are far more likely to be caught up in a vicious and deadly cycle, business should raise concern about the rule of law and equal justice. And where precious public resources are wasted on the relentless pursuit of executions, rather than invested in schools, quality healthcare, social services, and infrastructure, business must vocally call into question government priorities. 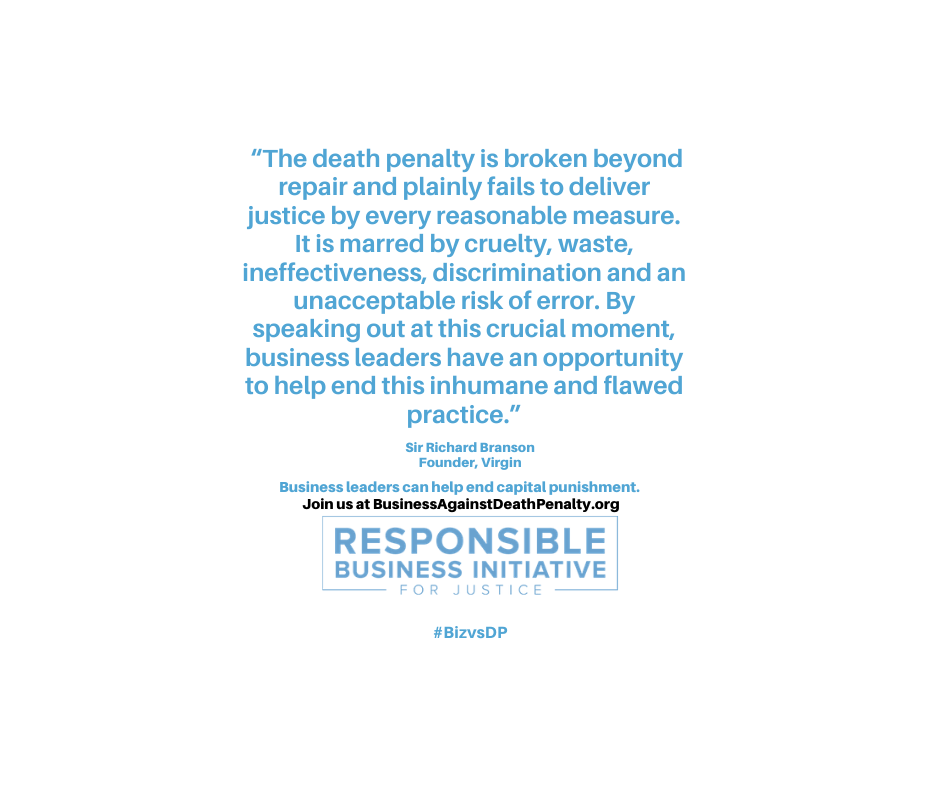 As business leaders, we must strive to hold up our end of a social contract that entrusts us with great leverage to grow and succeed. That means we must use our voices and our platforms to advance human rights and social justice. We must never be bystanders in the face of injustice. It’s time to end the death penalty for good.

Learn more about the Business Leaders’ Declaration Against the Death Penalty here.

Abolishing the death penalty in Virginia