Incredible to see Venezuela Aid Live pulled off so spectacularly yesterday with 350,000 people uniting behind one cause of raising awareness and funds for the humanitarian crisis in Venezuela.

There aren’t many things that I am willing to miss a Virgin Galactic spaceflight for – but I really wanted to show my support for the people of Venezuela. It really was a momentous day and the world can no longer close its eyes to this unacceptable situation.

Venezuela Aid Live was held in a symbolic location on the bridge, right near the border, which the Venezuelan Government had blocked with shipping containers to stop aid getting in. Yesterday we built bridges of hope for the Venezuelan people through music. The crisis in Venezuela worsens every day with widespread food and medicine shortages. Three million people have already been displaced, and the number grows steadily. This concert is all about bringing much needed relief. It’s all about making a difference to the lives of millions who have been suffering too long. Hopefully by getting aid into the country we’ll be able to get help to people who are dying from preventable illnesses and be able to get food to those who need it most. I visited the warehouse where the aid was being kept. It felt so unnecessary that there were all these supplies ready to help people, yet they can’t be delivered. I met so many Venezuelan people who shared their heartbreaking stories. I met families torn apart by separation; mothers who decided to flee the country so their children could have an education; people who desperately needed to access medicine so had to leave their loved ones. What many of them told me is that would love to return to Venezuela one day, that they will never give up on their home.

What has also been really heartwarming is seeing how Cucuta residents have been so welcoming to the Venezuelan people in their time of need, they should all be proud global citizens. I was also delighted to hear about how Virgin Mobile in Colombia has welcomed refugees and now employs many in their offices in across Colombia. It’s a great example of solidarity, and I’ll share more on that soon.

A wonderful example of building bridges with music was Chino and Nacho getting back together. The singers have been separated for two years, but they decided to reunite to support Venezuela. They gave a really emotional performance that the crowd went really wild for. I also couldn’t resist joining in and danced my way through the day. I had the pleasure of being joined backstage by Luis Fonsi, who gave me a quick rendition of his hit song Despacito.  By the afternoon, the crowd had swelled to hundreds of thousands and stretched all across the horizon. It was such an incredible sight to behold and I really felt proud to be able to play a part in such a wonderful event and to support the Venezuelan people. I was also sent a picture of the concert from space, which really does put into perspective how big the crowd was. None of this would have happened without the vision of one man - my wonderful Colombian friend Bruno Ocampo, who was crazy enough to commit to a timeline of less than three weeks to put this concert together -  the shortest time ever to plan an event of this magnitude. But I know that the craziest ideas are often the best ideas! 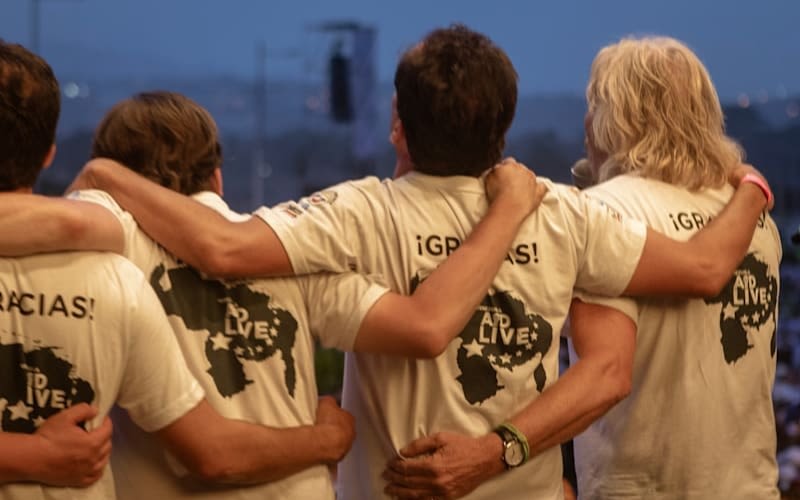 But the concert is just the beginning - we now need the support of the international community – governments, multilateral organisations and the private sector, to support the people of Venezuela.

Head over to Venezuela Aid Live to donate or find out more about how you can support the people of Venezuela.