Helping children with cancer in Ukraine

It’s horrific to see the violent war ravage on in Ukraine.

Amidst the destruction and devastation, there are some incredible grassroots efforts providing critical support to the people of Ukraine. At Virgin Unite, we’re proud to support a range of projects, and we’d like to shine a light on the work they are doing and the ways we can all help.

One of the projects we’ve supported is called a children’s cancer charity called Tabletochki. When the Russian invasion began, Tabletochki  joined a global initiative called SAFER Ukraine to carry out medical evacuations of children with cancer to the world's leading clinics. It has also expanded its operation to emergency humanitarian aid projects. The thought of children with cancer being stuck in a country where hospitals are being bombed is one of the most horrific things I could imagine, and it felt imperative to support these evacuations.

In the first month of the war, Tabletochki helped 800 children evacuate Ukraine, and also helped some children move to safer places within the country. The foundation continues to support oncology centres and doctors within the country, and has gone above and beyond by supporting also helped frontline hospitals and military hospitals. The team also helped other foundations and volunteer initiatives to purchase insulin, L-thyroxine, anticoagulants, and medication for cardiac patients, and purchased 2,000 first-aid kits for the military.

Behind every single statistic is a story – and one of the 800 children that Tabletochki helped reach safety is an eight-year-old boy called Dima.

Dima and his mother, Oksana, spent more than two weeks in the basement of their house, which served as a bomb shelter. Dima has blood cancer and suffered from severe complications after receiving chemotherapy. He has been in the palliative care program of the Tabletochki Foundation for several years. The cold and damp basement worsened his condition, and the family nearly ran out of medical supplies, with no opportunity to replenish their stocks.

Thankfully, Dima and his mother managed to evacuate their home in Chernihiv, which had been under constant attack. His grandmother and his beloved dog called Yasia went with them. Yasia had been given to Dima as a gift from Tabletochki for his birthday after dreaming about owning a dog for a long time. Since then, Dima and Yasia became inseparable friends. 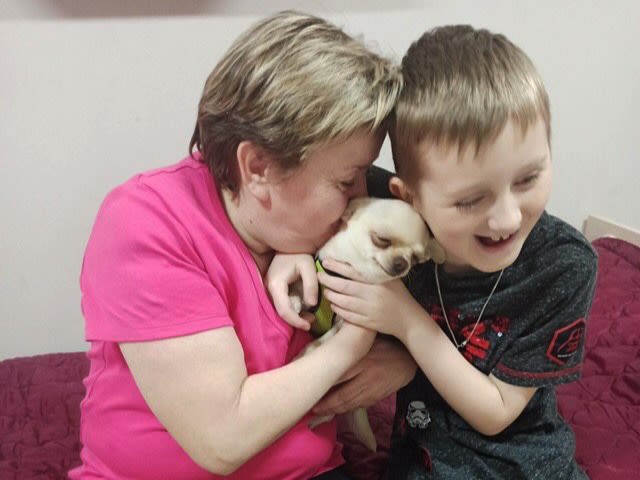 Dima and his family embarked on a long trip to Poland, but sadly Yasia was not able to travel with them on the bus with other ill children. One of the team members at Tabletochki, Olena Semeniuk, went above and beyond to drive the dog all the way to Poland so they could be reunited.

Dima and his family are now living in France where he is receiving the necessary medical care, and Yasia remains by his side.

Stories like this fill me with hope, and remind us all of the individual lives that every statistic represents. There are so many more people like Dima who need our help, and supporting grassroots organisations like Tabletochki is one of the best things we can do.

You can support Ukrainian children with cancer and Tabletochki right here. We’ll continue to shine a light on the Ukrainian initiatives supported by Virgin Unite over the coming weeks.