Jack Brockway
by Clare Kelly
Richard Branson and Peter Gabriel first pitched the idea of The Elders to Nelson Mandela in 2003.

At the heart of the idea was the notion that the world needs to better promote the shared interests of humanity – and that all of us, especially our leaders, must stand up for universal human rights.

Virgin Unite incubated The Elders with the help of a wonderful group of partners. Led by Nelson Mandela and his formidable wife and human rights leader, Graça Machel, The Elders took form – a small, dedicated group of individuals, using their collective experience and influence to help tackle some of the most pressing problems facing the world today. 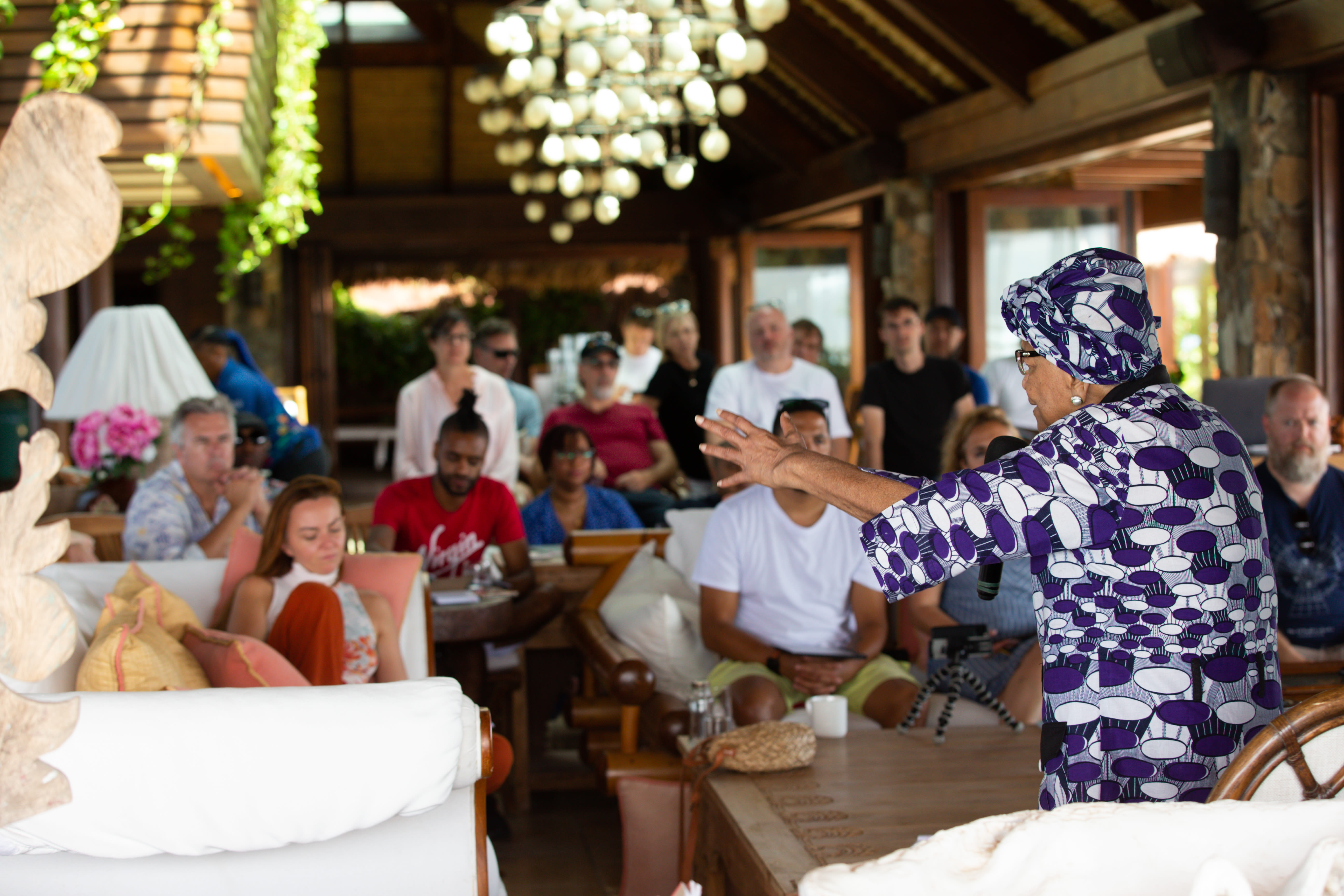 Over the last 15 years Desmond Tutu, Jimmy Carter, the late Kofi Annan, and others, have been active members of The Elders, working together for peace, justice, and human rights. In early 2019 The Elders announced Ellen Johnson Sirleaf, Juan Manuel Santos and Zeid Raad Al Hussein as new member of The Elders.

Ellen Johnson Sirleaf was Africa’s first elected female Head of State, becoming President of Liberia in 2005, after over a decade of exile during the country’s civil war. Sirleaf vowed to end corruption, establish unity, and rebuild the country’s devastated infrastructure. She was awarded the Nobel Peace Prize in 2011 for her contribution to securing peace in Liberia and promoting economic and social development.

Former President Sirleaf recently attended a Virgin Unite gathering. While there, she reflected on the urgent need for political leadership in relation to pandemic preparedness, climate change, and in elevating female leaders in Africa.

She spoke passionately about the world’s lack of collaborative action in times of crisis, and the lack of women in global leadership positions. She said: “In Beijing, 1995, world leaders committed to having 30% women participating across all leadership endeavours. We are now 26 years on and are still not there. It is time to do something about this – to stop marginalising women.” 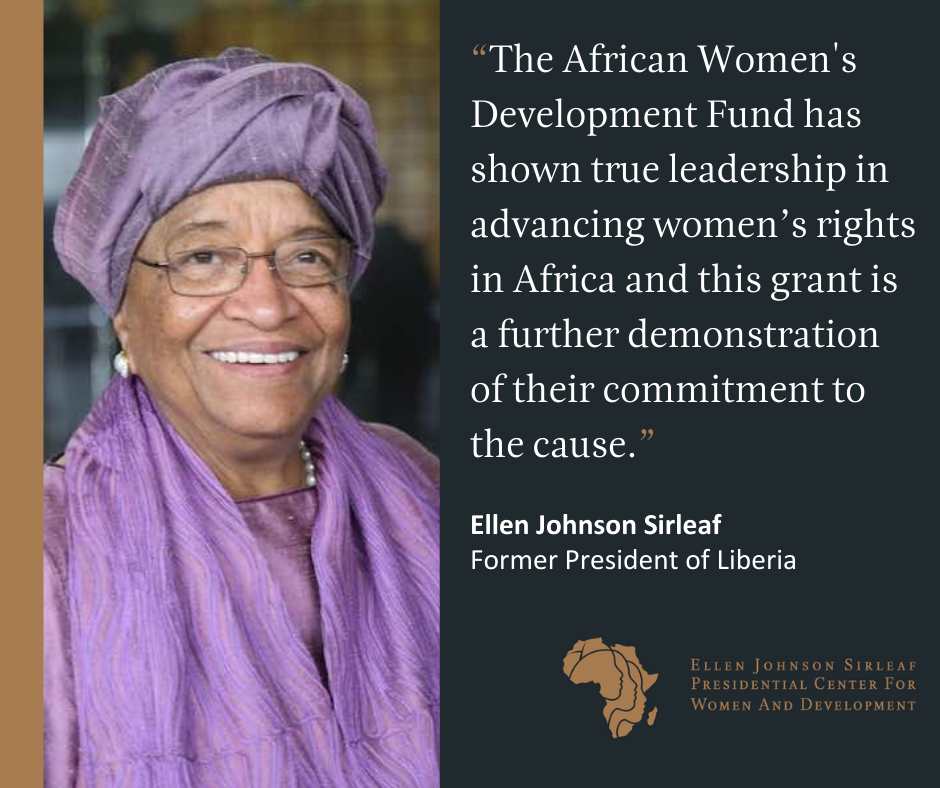 A patron of the African Women Leadership Network (AWLN), former President Sirleaf is working with the organisation to break through systemic barriers and create a wave of African women, eligible and ready to take on leadership positions. The AWLN launched in 2017, with the support of the African Union Commission and the United Nations and is mobilising women towards a continental movement that will elevate the status of women's leadership in Africa.

“With the African Women Leadership Network progress has been made, but unfortunately changes are the exception, not the rule. We need change, not tokenism. We need change so that equity prevails,” said Sirleaf. “Women are demanding the right to compete – not for gifts or giveaways, but to compete – based on talent, effort and performance.”

The Elders are urging leaders to prioritise access to justice and gender equality. To mark the UN’s campaign for '16 days of activism against gender-based violence', The Elders reflected on leaders’ responsibilities, regardless of gender, to end this persistent injustice. 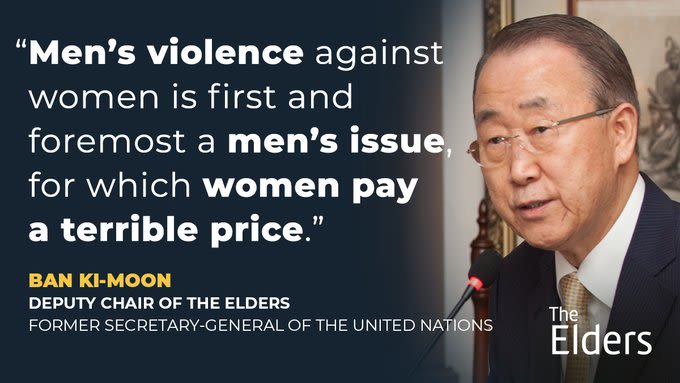 Fellow Elders Ban Ki-moon and Mary Robinson have also discussed what shaped them as gender rights advocates, as well as the role of male leaders in ending violence against women and challenging misogyny. Listen to them on the most recent episode of the Finding Humanity podcast.

Former President Sirleaf, the AWLN, and her own foundation, The EJS Centre, are all working to inspiring people everywhere, particularly women and girls, to reach for their true potential, break through barriers and pursue their dreams.

We encourage everyone to learn more about EJS and support its important work in increasing the representation of women in leadership roles and public service across Africa.

Please join us in supporting Ellen Johnson Sirleaf, and The Elders, as they elevate women to their rightful place of leadership – and create equal futures for all.