Why we shouldn’t be afraid about the future of work

100% Human at Work
by Anna Gowdridge
I recently had the honour of hosting a series of conversations with business leaders in New York, where we brainstormed what the future of work could look like if it was 100% Human (and what might stop us from getting there).

What I found fascinating, and unexpected, was that several of the conversations got quite philosophical about what ‘work’ actually is, and how our idea of work and how we speak about it is evolving.

When people talk about ‘work’ it is now much more common to use words such as purpose and passion, a lexicon that didn’t exist twenty years ago.

The nature of jobs has also shifted, we no longer have 30-year careers with the same company. Many of the next generation entering the workforce will have multiple jobs and employers at the same time, demanding new and different things by way of reward and compensation for their time. So, quite rightly, the language around jobs and work also needed to evolve. 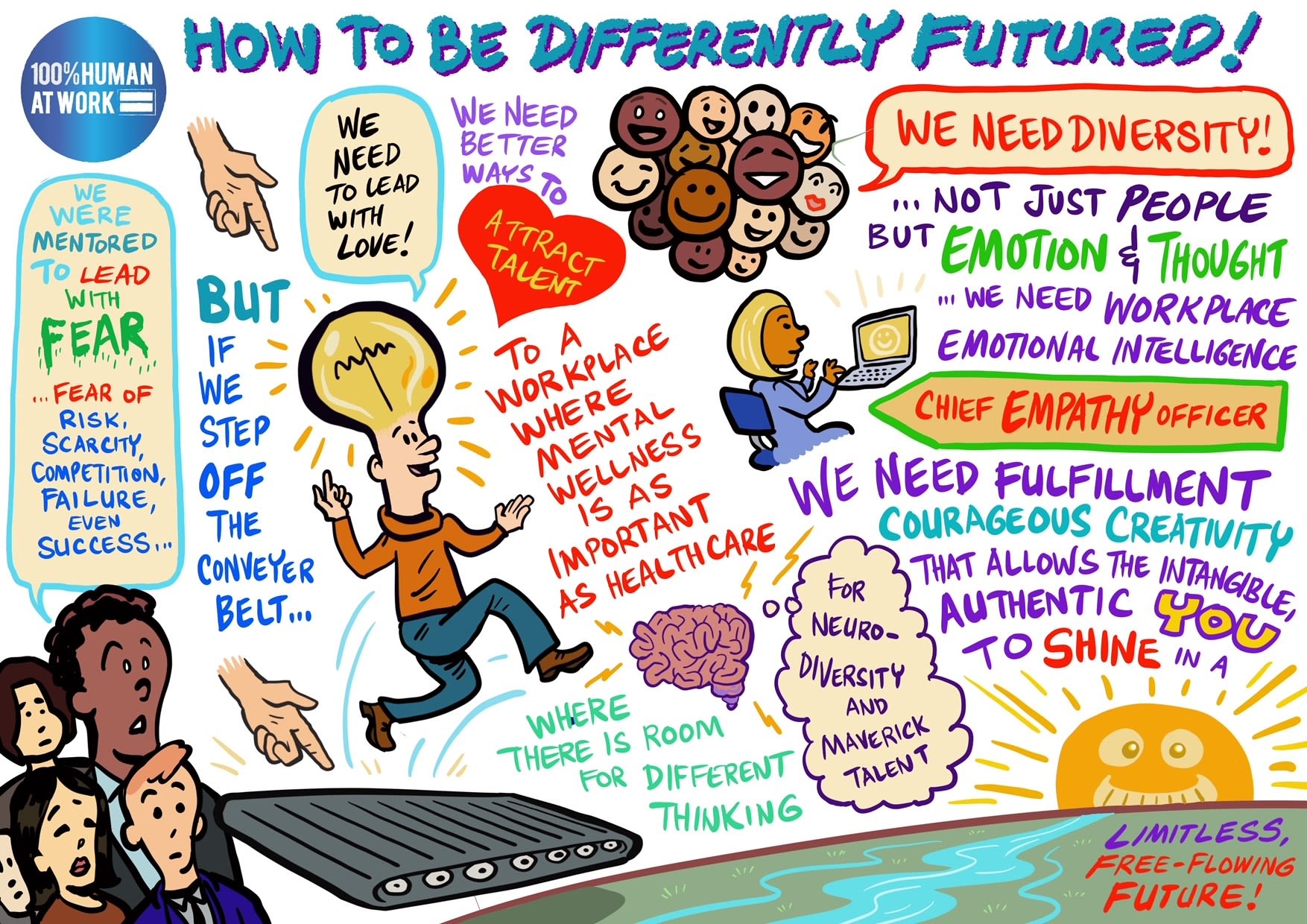 One example of new language that has permeated the working world since the advent of Covid-19 is the concept of ‘essential’ and ‘non-essential’ work. Over the last two years that terminology has helped us place a higher value on what may have previously been considered undervalued sectors, such as delivery drivers, supermarket workers, carers, and those who work in education. It’s wonderful to think that we could go on and make that status change a permanent thing.

Whilst I want to mainly focus on the wonderful visions for the future that we discussed (and some of the new language that I hope will become part of the long-term lexicon of the working world), we weren’t able to ignore the obstacles there are to creating a human future of work.

We need companies to be brave, to try new things, to lead the way, and to move past fear.

Ominously, throughout every conversation, the word fear came up again and again. Fear of scarcity, fear of change, fear of risk and the unknown, and even fear of litigation. With this in mind, the first word I would suggest be included in the 100% Human dictionary is ‘brave’. We need companies to be brave, to try new things, to lead the way, and to move past fear.

If we could collectively be brave, what might a 100% Human future of work look like? How different would it be if we saw a future of work that values all people, that enables people to provide for their families, pay the rent in secure jobs, all while bringing purpose and passion to the working world.

In many ways these conversations showed me that we know where we want to go, but the question remains, how do we get there? How do we change our defaults when we are no longer in crisis mode?

In my mind it will be critical that we learn and develop the answers in collaboration, not competition. I hope that movements like 100% Human at Work will be able to play a role in bringing businesses together to test and experiment with new ways of working.

100% Human at Work is a charitable initiative that was incubated by The B Team and Virgin Unite and has been owned and grown by the wonderful organisations across their community. Together they are working to catalyse a 100% Human future of work that serves humanity and the planet.