The small but mighty bakery on the Hudson River

Image from Greyston Bakery Bakers on a mission
by Joshua Wiese

Imagine putting your name on a list, and when it gets to the top, you get a job. That’s exactly how this small bakery is giving people opportunities.

Unemployment in the US fell to 3.6 per cent in April. After a record 103 straight months of job growth, the country reached its lowest unemployment levels since 1969. Yet, even in an unprecedented labor market, tens of millions of Americans eager to work – the formerly incarcerated, refugees, those with limited education – continue to face barriers that keep employment opportunities out of reach. Myself and some members of the Virgin Unite team just visited a small but mighty bakery on the Hudson River that could hold a key to breaking those barriers down, connecting businesses to the talent and energy they need to thrive.

Greyston Bakery started in 1982 when Bernie Glassman and the members of his Zen Buddhist meditation group borrowed $300,000 to open a small storefront bakery. They were only interested in making enough money to sustain themselves while focusing on spiritual pursuits. But as the group’s spiritual practices and business experience grew, they started to develop a vision for how both might grow together. If the bakery could provide livelihoods for the meditation group, why not expand and create opportunities for others in need of work. 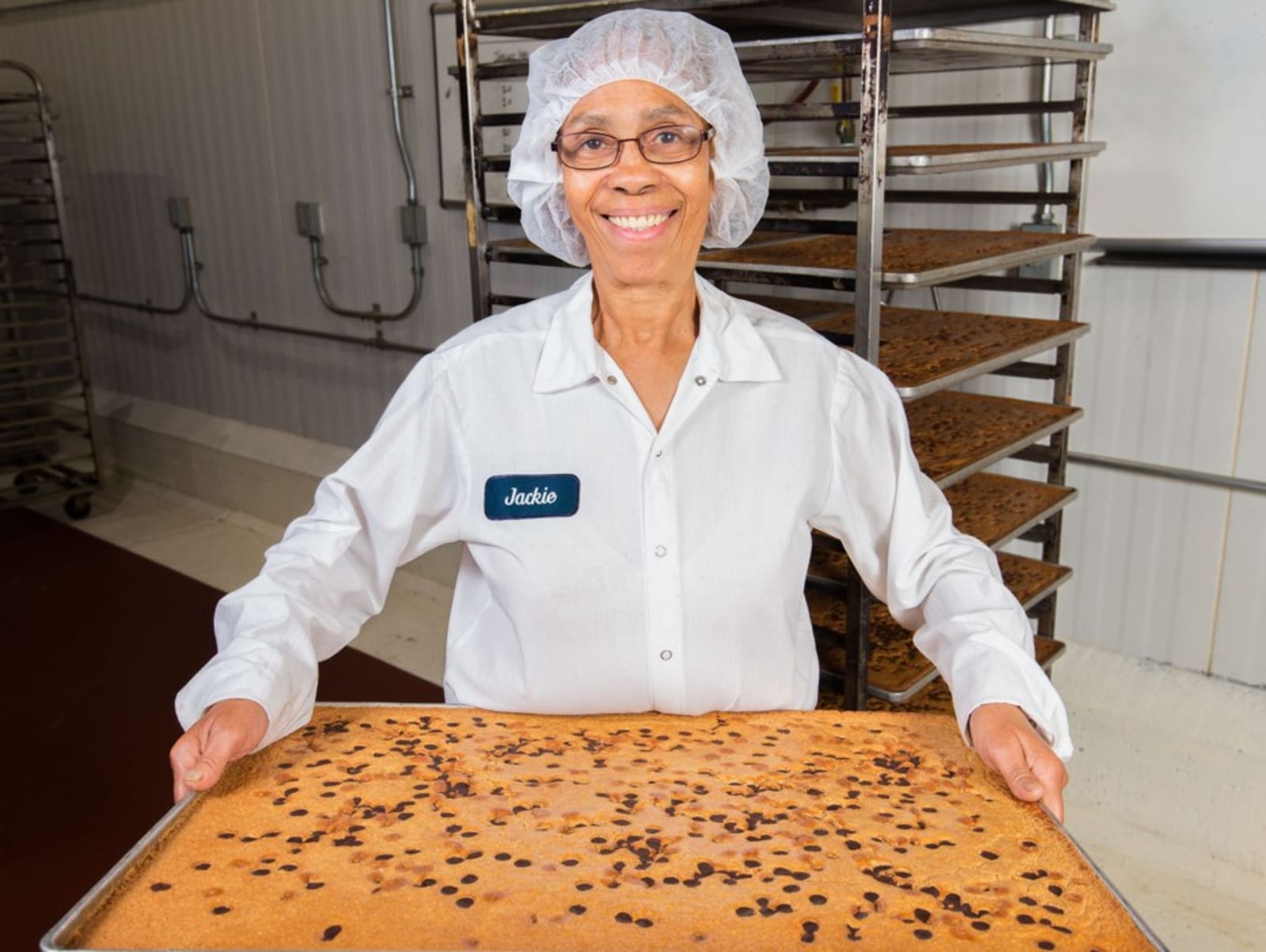 Greyston moved from its upscale home in New York’s Bronx borough to an abandoned factory in downtrodden Yonkers (a 30 minute drive away), which, at the time, had the highest per capita homeless population in the country. Glassman and the Greyston team developed the Open Hiring Model, which transformed their little Buddhist bakery into a thriving business that does $20 million in annual revenue and currently employs over 130 people. 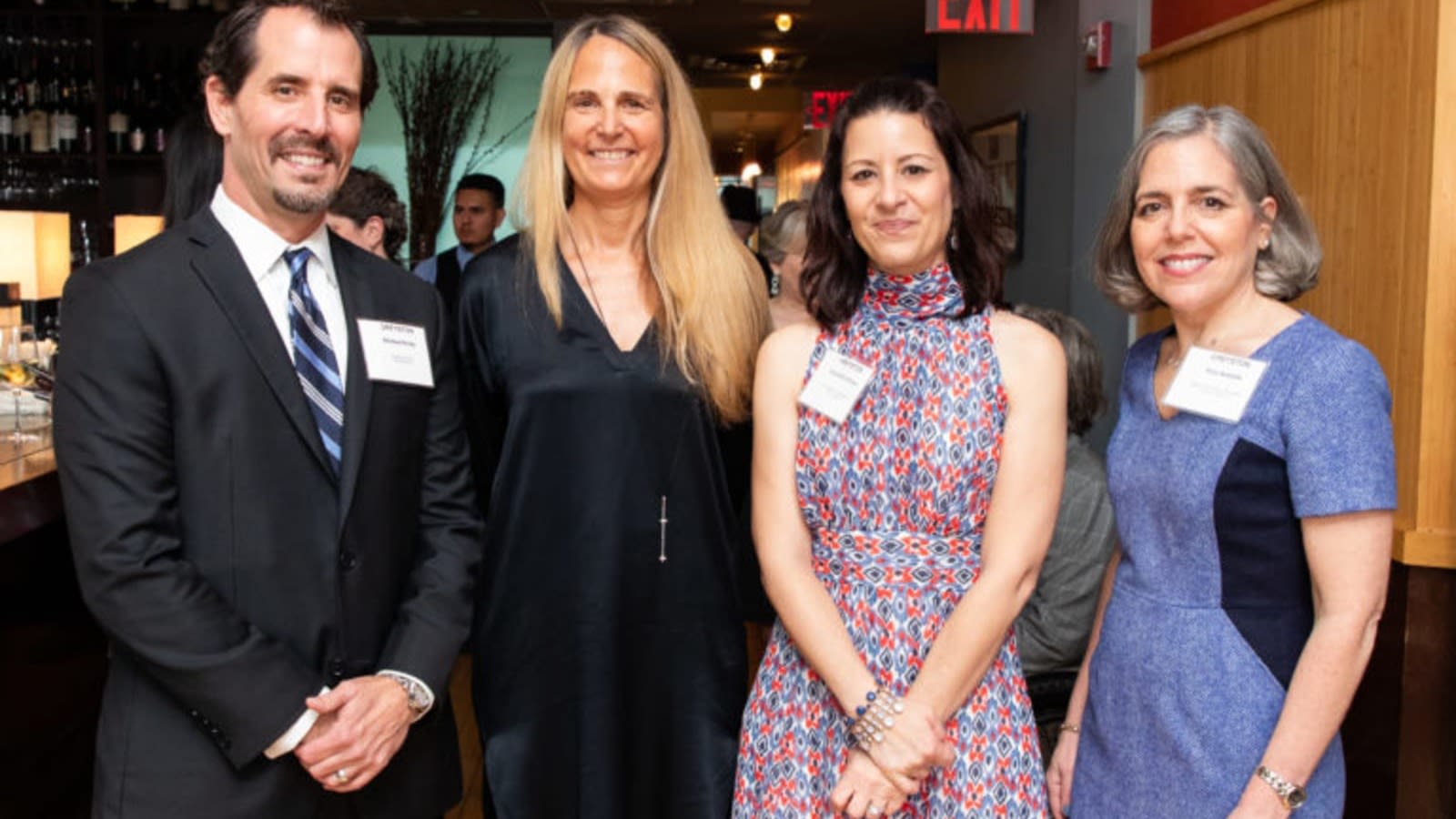 A few months back, Virgin Unite President Jean Oelwang got a message from Greyston asking if she’d accept the Bernie Glassman Trailblazer Award at their annual gala – an evening celebrating Bernie Glassman (Greyston’s visionary founder) and leadership efforts in the inclusive hiring movement. Bernie, who passed away in 2018, was one of Jean’s heroes, and this was a perfect opportunity for us to get a closer look at the Open Hiring Model we’ve heard so much about. This would also give us a chance to meet some of Greyston’s bakers and hear their stories.

When the day finally came, we met Greyston CEO Mike Brady at the factory for a tour. Mike describes the Open Hiring Model as simple and straightforward: “You put your name on a list and when you get to the top, you get a job. It’s that simple. We trust that everyone, if given an opportunity, has the potential to succeed. We provide people with the tools and support to be successful on the job, without regard for their previous education, skills or background. Those that can do the job continue with Greyston as long as they want, and those that can’t are supported to find their next opportunity. And those that work hard and move on to different jobs elsewhere are celebrated.”

People who take the offer when that call comes start off as paid apprentices – a months-long job training and life-skills course. Around half choose to complete the program and transition into entry-level jobs as mixers or packaging for distribution. The company helps each employee develop a career path, and provides support, whether it’s training for different professions or a GED course. The Open Hiring Model’s results speak for themselves. Morale is high, and people stick around. Annual employee turnover rate in similar manufacturing and production industries hover between 30 per cent and 70 per cent, at Greyston, it’s 12 per cent. 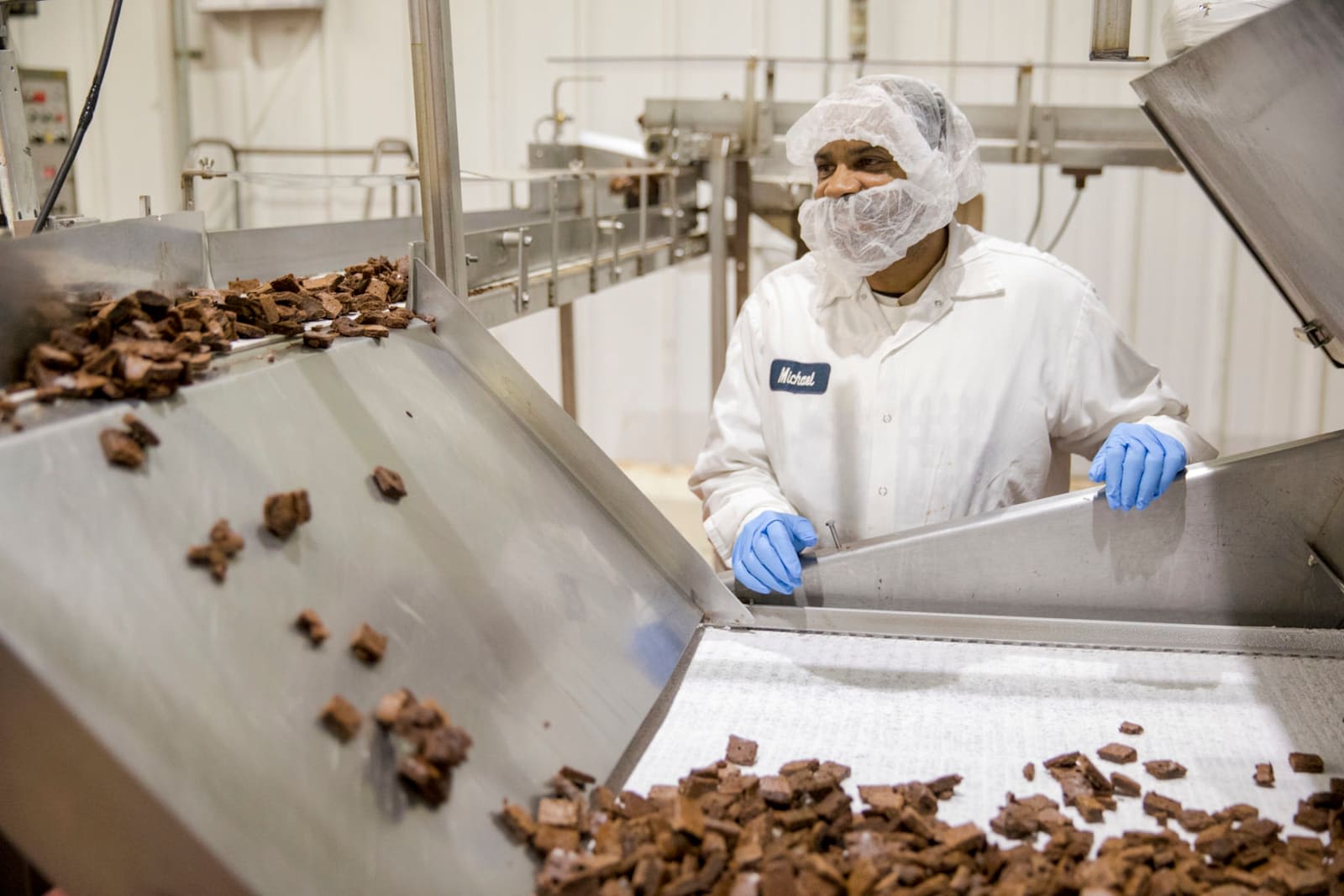 Image from Greyston Bakery Bakers on a mission

According to Brady, the business case is clear; “Upwards of $3 billion is spent each year on outdated human resources practices that filter people out of the workforce, practices such as background checks and credit checks that have no bearing on a person’s potential success on the job. Tremendous value and talent can be unlocked in an enterprise by investing in human capital models that trust in human potential.”

As we moved through the factory, the team’s glow was palpable. The air was sweet and rich, filled with the smell of freshly baked brownies on their way to a pint of Ben & Jerry’s ice cream or Whole Foods, two of Greyston’s biggest clients. Not only were the team making exceptional treats, but they were also proving a business model with the potential to help confront inequality, racism, xenophobia, and other forms of othering and oppression that too often shape who has access to and who succeeds in the workplace.

At the gala that night, we met Cassandra, who was a single mother with impressive sales abilities. She was impressive in interviews and landed job offers, only to have them rescinded when background checks revealed her criminal record. Within Cassandra’s first year at Greyston, she was promoted to Quality Assurance Technologist. Greyston supported her in continuing college, and she’s now on track to become a certified Substance Abuse Counselor. 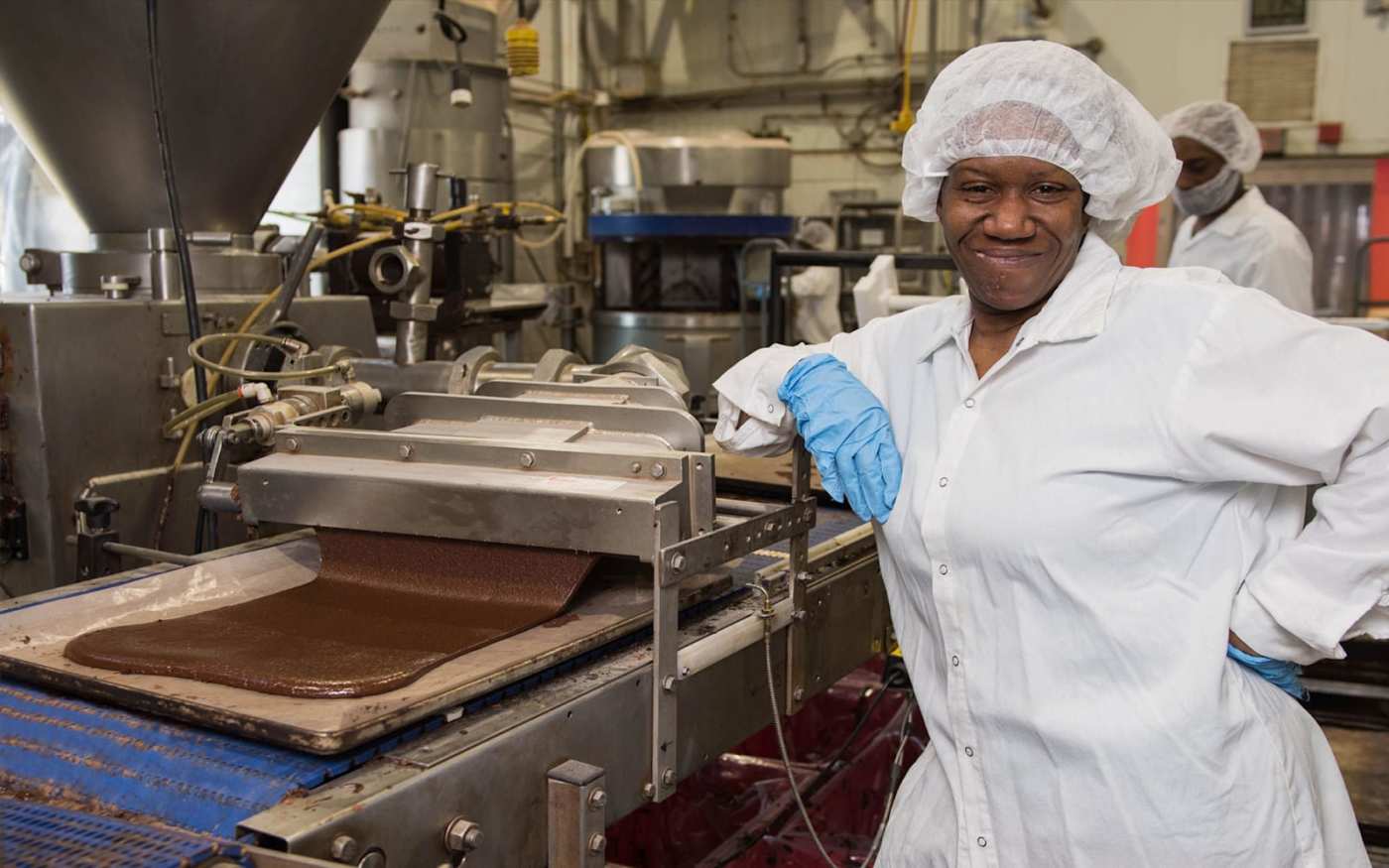 Image from Greyston Bakery Bakers on a mission

We met Alvin, who struggled to rebuild his life after 12.5 years in prison. Much of Alvin’s youth was caught up in selling and using drugs, carrying guns and violence. He understood the pain that path brought to others and himself, but the weight of that knowledge added even more challenge to overcoming the stigma of his criminal history. Alvin’s call from Greyston opened a clear path to dignity and success, and his yes to their offer added one more dedicated and energetic team member bringing reignited fire and unlocked talent to the job.

Jean shared the Bernie Glassman Trailblazer Award stage with Jacqueline Vance, who was selected by Greyston’s whole team as the embodiment of what the company means to them. ‘Miss Jackie’ built a 14-year career out of her Greyston call and job offer, starting as an apprentice and working her way up to Lead Operator. She was a role model and mentor for her fellow bakers. Miss Jackie retired in 2018. Greyston’s success is her legacy.

Brady is hopeful that the tight labor market will inspire more companies to embrace open hiring so businesses and communities alike can reap the benefits. “We believe our model should be the norm not the exception: Sustaining exclusionary hiring practices is no longer a viable strategy. Instead, we need to create regenerative business practices. Practices that merely ‘sustain’ a status quo, continue to deplete our environment and communities, while regenerative practices strengthen our environment, communities and economy.” 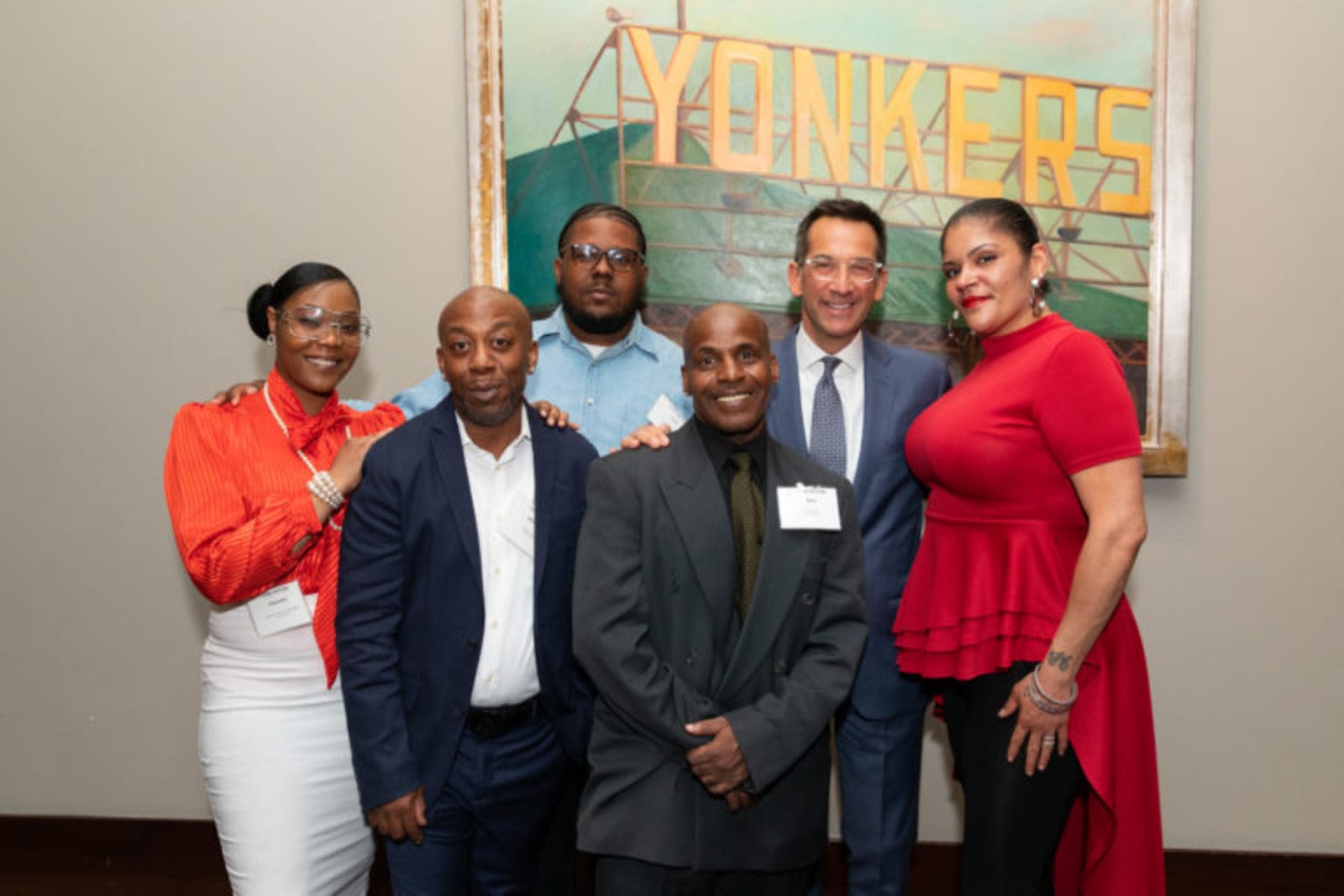 Greyston launched the Center for Open Hiring to realise that vision, last year. Brady sees endless opportunities for introducing open hiring at companies. It’s a great fit for jobs in janitorial or mail services, food service, or administrative work. He also sees it as a viable alternative to outsourcing, building an in-house pipeline of opportunity to a bigger and broader talent pool. The model gives companies new pathways to talent that generate easily measured returns on investment, it builds positive community impact, and improves brand value. Unilever and the Stern School of Business at NYU are among the Center’s first clients.

Virgin Unite dedicates much of its energy to developing and supporting the ideas, tools, and partners who can realise a future that leaves no one behind. Greyston is among the best examples we’ve come across.