The B Team welcomes Jean Oelwang

Image from Virgin
by Clare Kelly

The B Team has announced Jean Oelwang, Founding CEO and President of Virgin Unite, as a new member of its collective of global leaders.

The B Team, co-founded by Richard Branson, brings together business and civil society leaders, each holding themselves and their peers accountable to a new way of doing business.

This coalition of incredible leaders measure success not only by financial performance, but also by the health of people and the planet for the benefit of generations to come. Alongside Jean, Jesper Brodin, Chief Executive Officer of Ingka Group (the holding company of IKEA), will also be joining the collective.

Paul Polman, CEO of Unilever and Chair of The B Team, has publicly welcomed them both to the team: “Both Mr. Brodin and Ms. Oelwang’s purpose-driven approach to leadership has helped the practice of stakeholder governance gain hold in the private sector. We look forward to working with them to continue to push radical collaboration in every sector." 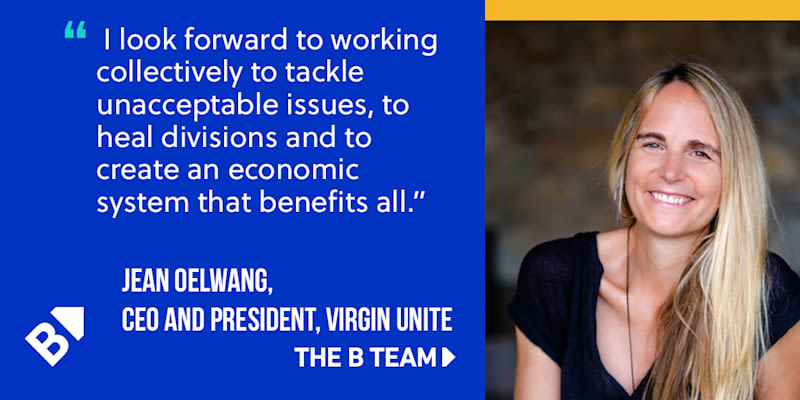 In 2003, Jean joined forces with Richard Branson and Virgin employees to create Virgin Unite  –  leaving her post as Co-CEO of Virgin Mobile Australia and serving as Virgin Unite’s founding CEO. Since then she has helped incubate several organisations and leadership initiatives within Virgin Unite including The B Team, The Elders, Ocean Unite and the Carbon War Room.

In addition, Jean leads Virgin Unite and The B Team’s 100% Human at Work network helping businesses move away from focusing solely on profit and toward helping people achieve their highest potential.

Partnership is at the core of all of Jean’s Virgin ventures, as is her commitment to changing business for good. “I’m honoured to be joining a group of leaders who are committed to realising a better way of doing business for humanity and the planet. I look forward to working collectively to tackle unacceptable issues, to heal divisions and to create an economic system that benefits all."

With calls for an inclusive global economy growing louder, the appointments of Jesper Brodin and Jean Oelwang will help bolster the B Team’s important work – addressing the need for radical collaboration among business, civil society and more to make this vision a reality.

“Mr. Brodin and Ms. Oelwang are inspiring examples of the partnership and holistic leadership this ‘decade of delivery’ requires. Whether it’s the climate crisis or the crisis of inequality, they’ve both helped build the cross-sector coalitions needed for a future that serves all,” B Team CEO Halla Tomasdottir said, “We’re thrilled to welcome them to The B Team and work together to push for radical collaboration in every sector.”

Keep up to date on all B Team news by visiting the website and don't miss Richard Branson and B Team CEO, Halla Tómasdóttir, discuss listening learning and leadership on this episode of Sirius XM radio.