RISE UP for ocean recovery

It is a paradox that, even as millions of us remain isolated from our families, friends and colleagues, one of the clearest lessons of the global pandemic is that for better or worse we are all connected with each other. We are also connected with the millions of species sharing our planet, and by our dependence on Earth’s natural systems.

Karen Sack is the president & CEO of Ocean Unite – an organisation incubated by Virgin Unite that is bringing together powerful voices to drive positive ocean conservation action.

Humanity’s tendency to believe that we are the master of the natural world is a dangerous delusion. The result? Accelerating global heating; a million species at risk of extinction; and devastating viruses emerging, thanks to our excessive encroachment into ecosystems. The solution? We must respect the power of nature, listen to science, and unite behind transformative positive change.

As we begin to emerge, tentatively, into a post-COVID-19 world, the legacy of this global tragedy must not be a swift return to business-as-usual. Instead, we should be guided by a determination to reimagine how we work and live, and most importantly restore our planet as well as ourselves, to good health.

Since health metaphors are currently ubiquitous, let’s use some to assess the state of the ocean. A full body scan has been done and the prognosis is not good – we are rapidly heading towards a scenario where rather than supporting life on Earth, the ocean itself may need to be put on life support.

The ocean is running a fever and suffering frequent hot flushes (yes, the ocean in this case is a woman). The last 10 years were the hottest ever for our seas, with 2019 breaking new records and marine heatwaves becoming the new normal. She is also suffering from osteoporosis as ocean acidification – triggered by our CO2 emissions – dissolves the shells and skeletons of shellfish and corals.

Kidney disease is clear and prevalent, courtesy of toxic pollution and the endless flow of plastic into a system that is struggling to cope. And, as if that isn’t enough, lung function is compromised. The ocean is gasping for breath as it battles hypoxia and deoxygenation, the marine version of emphysema, driven by fertilizer pollution and ocean heating. Oxygen minimum zones have expanded by 4.5 million km2 since the 1960s – add in a stressful lifestyle from noise pollution and from excessive and illegal fishing, and it’s clear that our patient needs admission to urgent care. 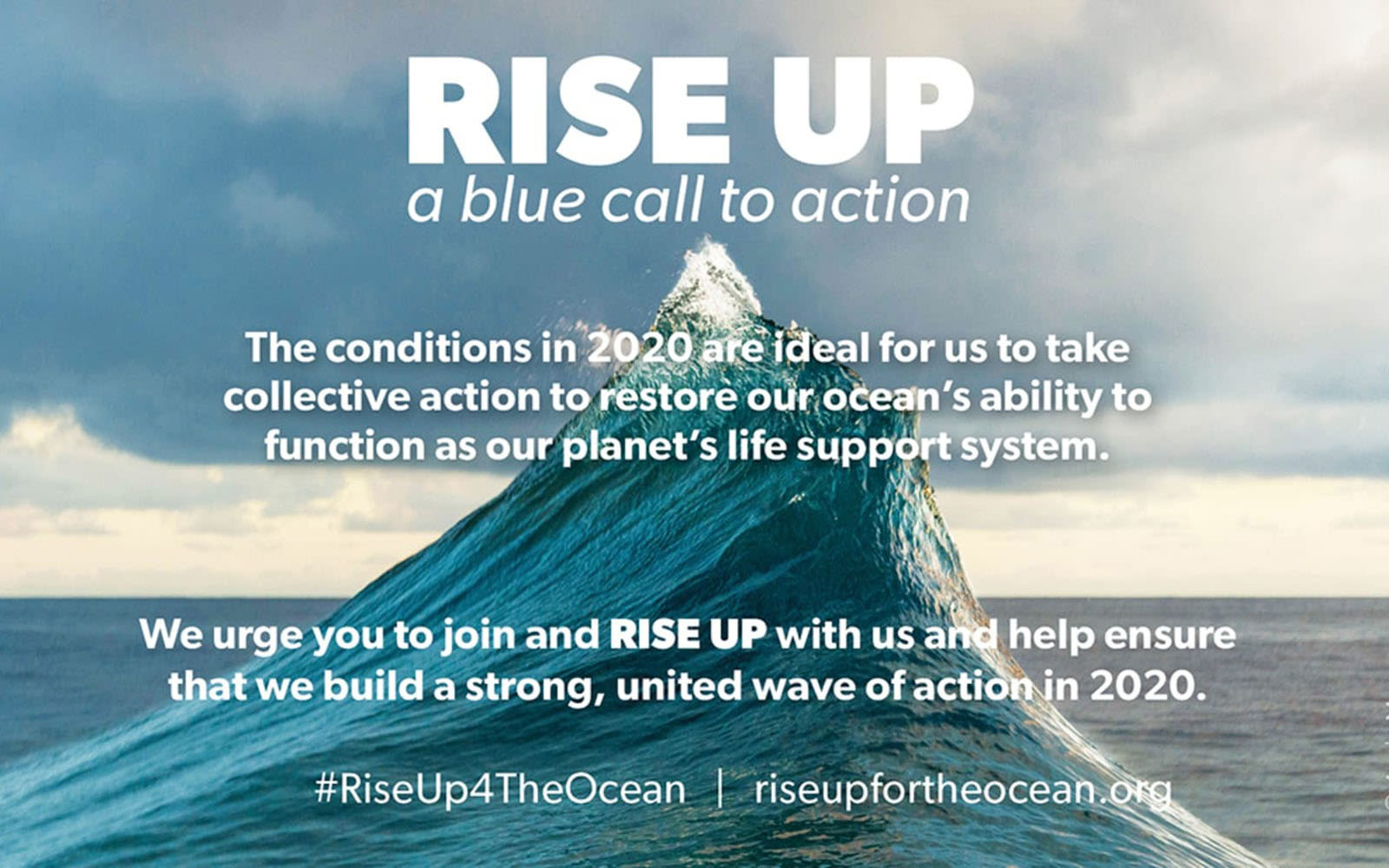 Image from Rise Up

What does the doctor order? The vast majority of doctors – aka marine scientists – agree. The prescription: the ocean equivalent of improved diet, more exercise, proper rest and rehabilitation – aka again – keeping global temperature rise below 1.5 degrees Celsius, highly protecting 30 per cent of the ocean by 2030, and sustainably managing any activity that takes place in the other 70 per cent.  It isn’t complicated. It doesn’t require a vaccine or treatment the world doesn’t have yet. It requires leadership, and visionary, multilateral action.

The ocean’s recovery plan can be summed up through six letters in two words: RISE UP! It literally spells out what must be done to start prioritising the ocean and everyone who depends on it rather than negotiating down to what is politically palatable. In the coming weeks, a series of blogs on this platform will show how these six steps provide the architecture for delivering transformative change to end the spiral of declining ocean health that will also safeguard our own future by:

Over 250 organisations from around the world agree. 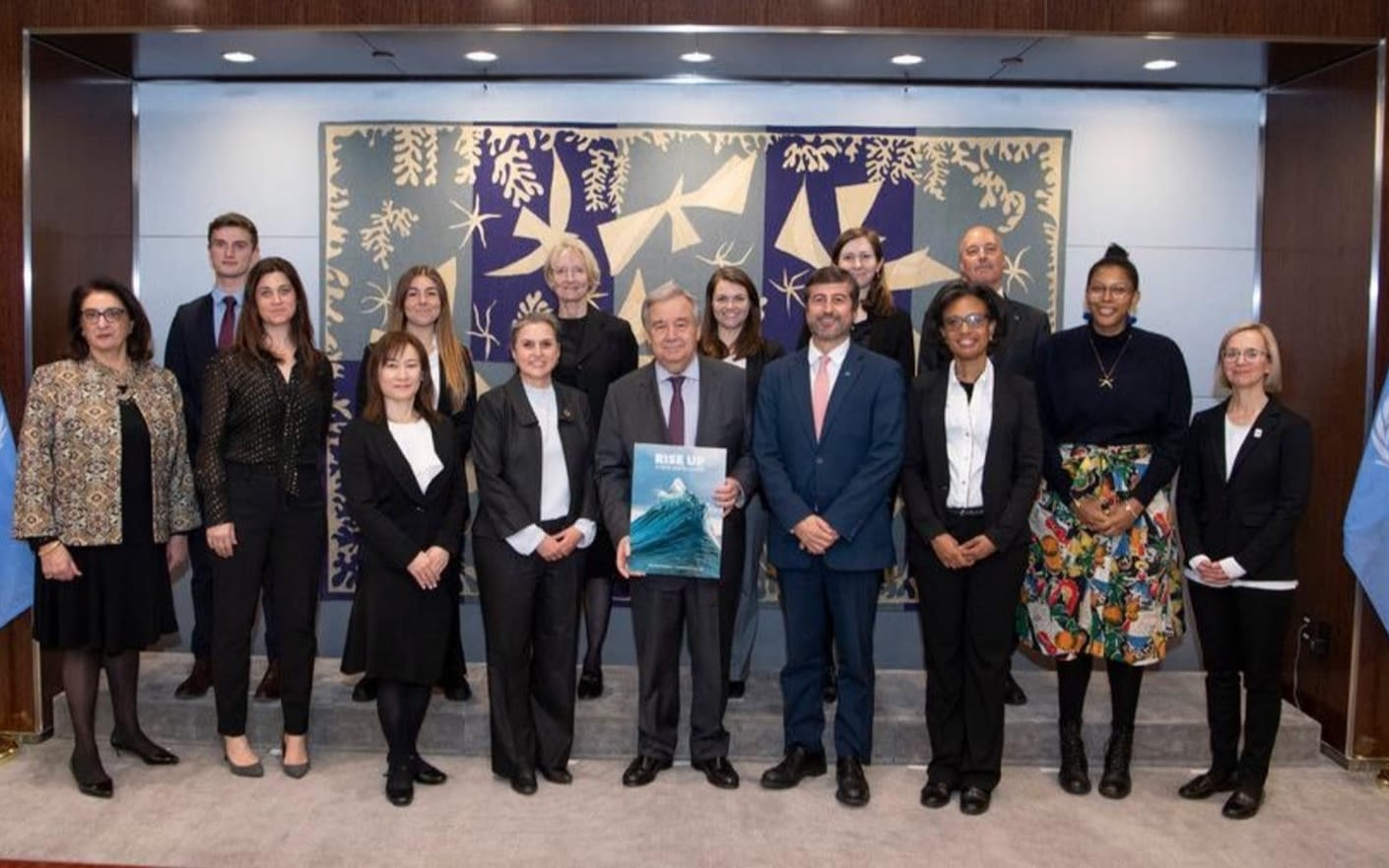 Image from Rise Up

RISE UP is a prescription for ocean health based on precautionary science and inspired by a unique collaboration of partner organisations including non-profits, philanthropies, indigenous peoples and fisherfolk groups. It’s a blue call to action by people who know, need and love our ocean. Developed through deep consultation over the course of almost a year, its message is urgent. As we bear witness to just how precarious life can be, we simply cannot afford to take any more chances on the health of the ocean that provides the very air we breathe, that feeds and sustains billions of people, hosts 80 per cent of all life on Earth, and absorbs 30 per cent of our excess carbon emissions.

And there’s no better place to start than the icy international waters surrounding Antarctica. Along with multiple partner organisations, scientists and governments, the Antarctica2020 campaign is dialling up the pressure for expanding the protection of the Southern Ocean to cover seven million km2 with the goal of getting the Member States of CCAMLR to agree to three new large MPAs when they (hopefully) meet later this year.

What better conservation measure could the world lead-off with in this, the 200th anniversary of the discovery of the frozen continent? It would be an amazing milestone for multilateralism in a year when temperatures spiked at a record 18.3 degrees. All that’s needed is political will from the two leaders of China and Russia to seize this historic moment and join every other country that has already agreed to this critical decision. Then we can mark 2020 as a milestone for planetary health as we chart a course for ocean recovery.

Governments also need to adopt a strong, binding new High Seas Treaty to protect ocean areas beyond national jurisdiction and honour their promise to secure our common marine heritage. The coronavirus may have postponed the final treaty negotiation session, but this extra time should be used to galvanize efforts, craft solutions and raise ambitions.

The treaty must include mechanisms for creating marine protected areas (MPAs) on the high seas which are vital to protecting 30 per cent of the ocean by 2030 – a science-led goal that should be enshrined in the post-2020 Global Biodiversity Framework being negotiated by governments later this year.

Half-hearted, piecemeal efforts just won’t cut it. We have squandered the ocean’s good health for too long and continue to thwart the power of nature at our peril. None of us can live without Vitamin Sea – the time has come to RISE UP for our ocean, our planet and our common, healthy future. RISE UP with us.

This post is part of a series produced by Virgin Unite in partnership with Ocean Unite, an initiative to unite and activate powerful voices for ocean-conservation action.