Breathing some of the world’s dirtiest air in Mongolia

Mongolia conjures images of adventure and pristine wilderness. Rolling pastures punctuated by nomadic herdsman and their grazing cattle. The landscape is crowned by the glorious frozen Altai mountains of the west, where the Golden Eagle Hunters roam.

This is what initially drew me to explore the country but it is also a land that may hold a foreboding insight into humanity’s future unless we address the climate crisis urgently and sever our reliance on fossil fuels. I embarked on a journey to explore both the traditional migration of the Golden Eagle hunters and the forced migration to the capital city Ulaanbataar (UB) brought about, in part, by the pressures of climate change.

Mongolia is one of the most sparsely populated countries on earth. It is the size of Western Europe but with a population of just over three million. It is a land that is synonymous with the traditional migrations of its nomadic herding families but in the last 20 years has seen one of the most significant forced migrations to a capital city on earth. 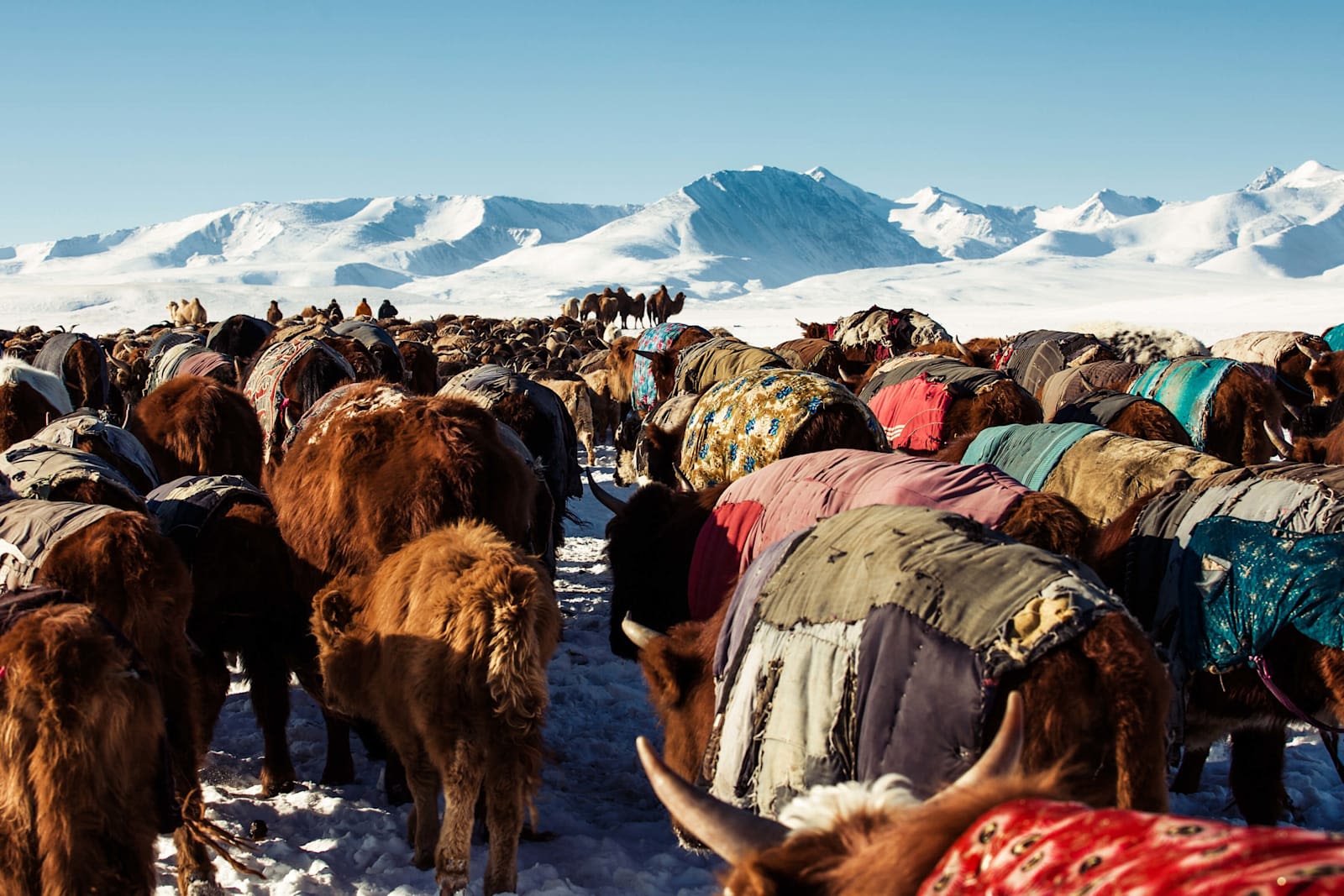 Climate change has taken its toll on this remote frozen land causing unpredictable and volatile weather patterns. Summers are becoming hotter and with this the once endless rolling green pastures are becoming dry yellow dust bowls. As a result, it has become far harder to find adequate grazing for the herds. Winters are becoming increasingly brutal too, with temperatures now dropping to new lows of -50.

‘Dzud’ is the term Mongolians use for a particular weather pattern where a hot, dry summer is followed by an unusually severe winter. Over the past 70 years, the average temperature in Mongolia has risen by 2.07 degrees, more than double the average global rise. This has exacerbated this weather phenomenon, with general consensus among the herders that ‘Dzuds’ are occurring far more frequently. Tens of millions of livestock have been lost in the last 30 years, literally freezing to death on the open plains and creating environmental migrants out of the herders. 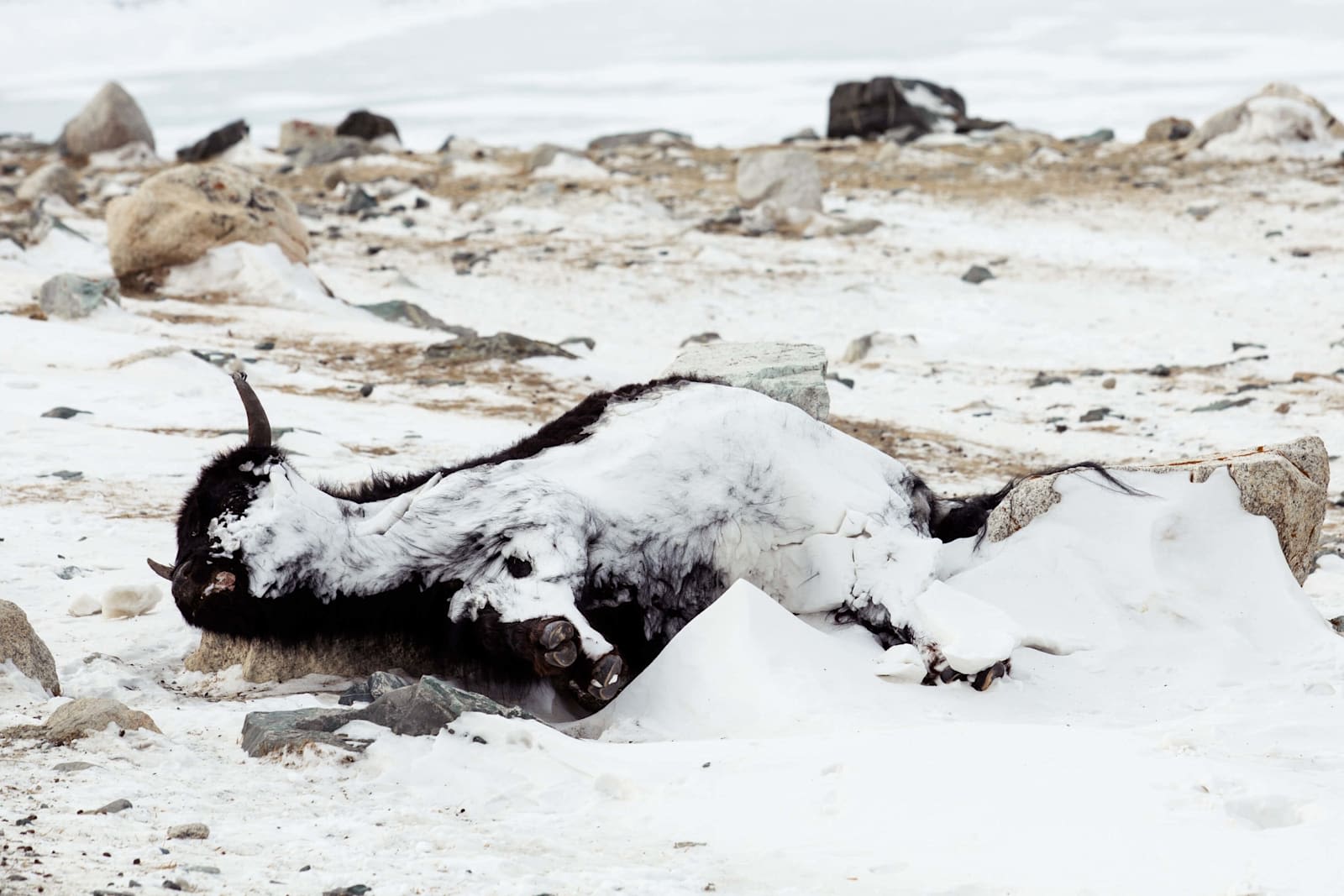 UB is home to half the population of Mongolia with around 1.5 million people. More than 50 per cent of those living in what is known as the Ger District; settlements of migrants that encircle the city but are not attached to the power grid, water supplies or sewage systems.

UB is the coldest capital on earth, with temperatures regularly reaching a low of -40C and sometimes even -50C in winter months. As the majority of the city is not attached to the power supply, the Ger district families burn raw coal bought cheaply on the black market to keep warm. Poorer families that can not afford even coal burn anything they can, such as disused tires and plastic bottles. This creates a noxious blanket of smog that envelops the capital. This is compounded by the presence of three huge coal burning power stations located within the city that tower ominously over the Ger district. 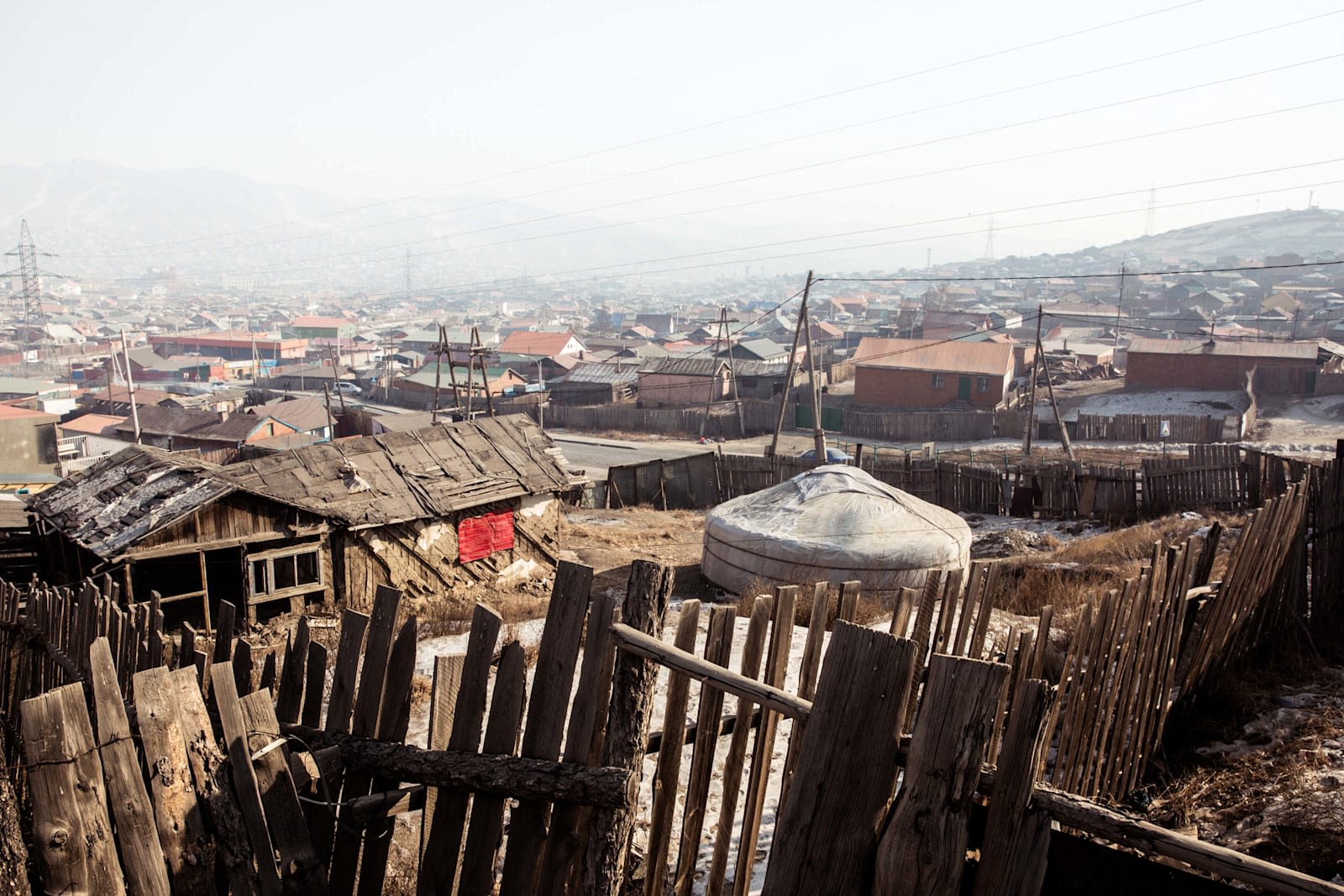 I spent three days photographing the Ger district In February and it felt as though I had fire in my lungs; the taste of coal was thick in the air and seemed to strip my nose and throat as I breathed. My nose started to bleed on the first day and did not stop until I left the country three weeks later. I immediately experienced nausea, headaches and shortness of breath. Sometimes the smog was so thick the roads I walked upon dissolved into a grey abyss.

In winter months UB is the most polluted capital city on the planet. In 2016 it overtook Delhi, which has a population almost 13 times the size of UB. On the 30th January 2018, data collected by the Government of Mongolia reported a PM2.5 reading (the measurement scale for microscopic particles) of 3,320 per cubic meter. That is 133 times the level the World Health Organisation (WHO) deems safe. 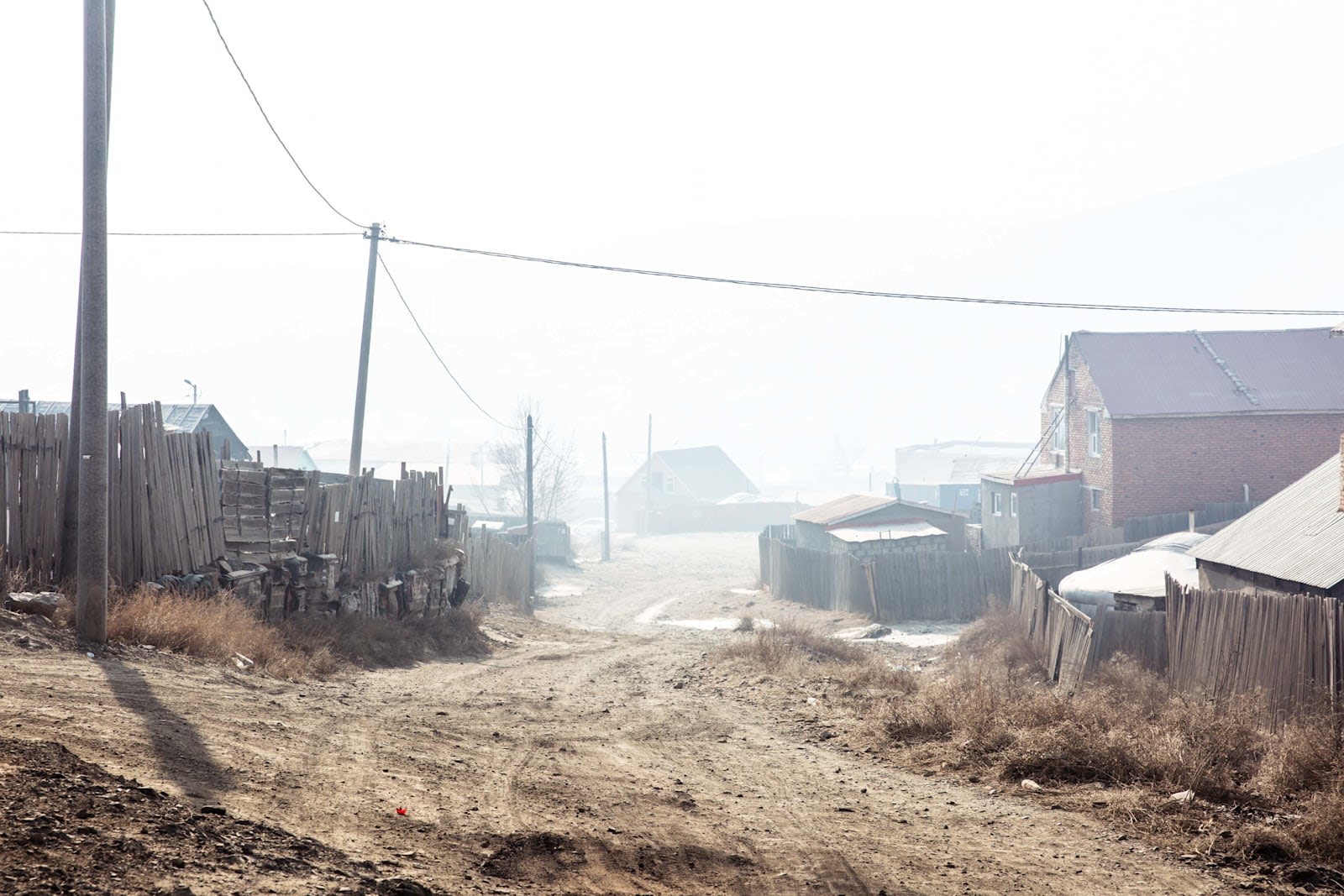 In UB respiratory infections have increased by a rate of 270 per cent in the last 10 years according to UNICEF and pneumonia is the second leading cause of death for children under five. Air pollution affects children the hardest, with exposure leading to chronic bronchitis, asthma, reduced lung function and can affect physical and brain development. UNICEF reports that children born and raised in UB have a 40% less lung capacity than children living in the countryside. These are the horrifying statistics that drew me to explore the impacts of climate change on this remote land and its people.

I started my journey in the westernmost province of Ulgii that borders Russia and China. I joined a traditional Mongolia Kazakh family on their winter to spring pasture migration. It was a balmy -35C as we set out with the herd just before dawn, a 1,000-strong herd of camels, horses, cashmere goats, cows, the odd yak and three ferocious dreadlocked guard dogs. It was led by Shokhan, the head of the family, and his golden eagle. 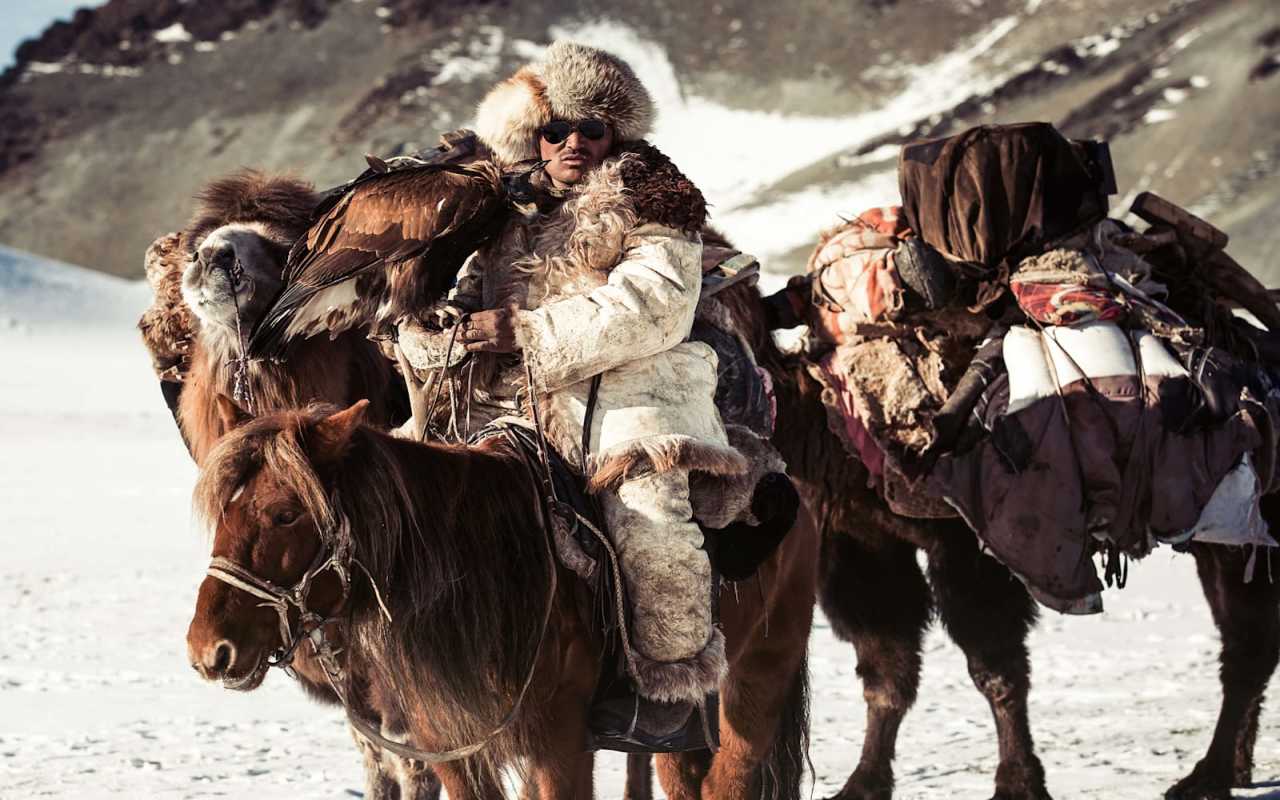 The journey was a hike of 150km up through pristinely beautiful, ever changing landscapes of frozen lakes, rivers and mountain passes. There was a golden silence I have never experienced, just the crunching of frozen snow underfoot and near mythical scenes in all directions. We slept in Gers, which is the Mongolian term for yurt, along the route for nine days and were able to catch a glimpse of this life lived in the wilderness, shepherding the precious herd.

The tradition of hunting with Golden Eagles is known as ‘Sayat’ in the Kazakh culture and has been practiced for more than 1,000 years. Genghis Khan is believed to have engaged in the sport. But ‘Berkutchi,’ the eagle hunters in western Mongolia believe it to be much more than a sport, their art and tradition pulses through their veins. If they don’t preserve it they believe they will lose contact with their ancestors. 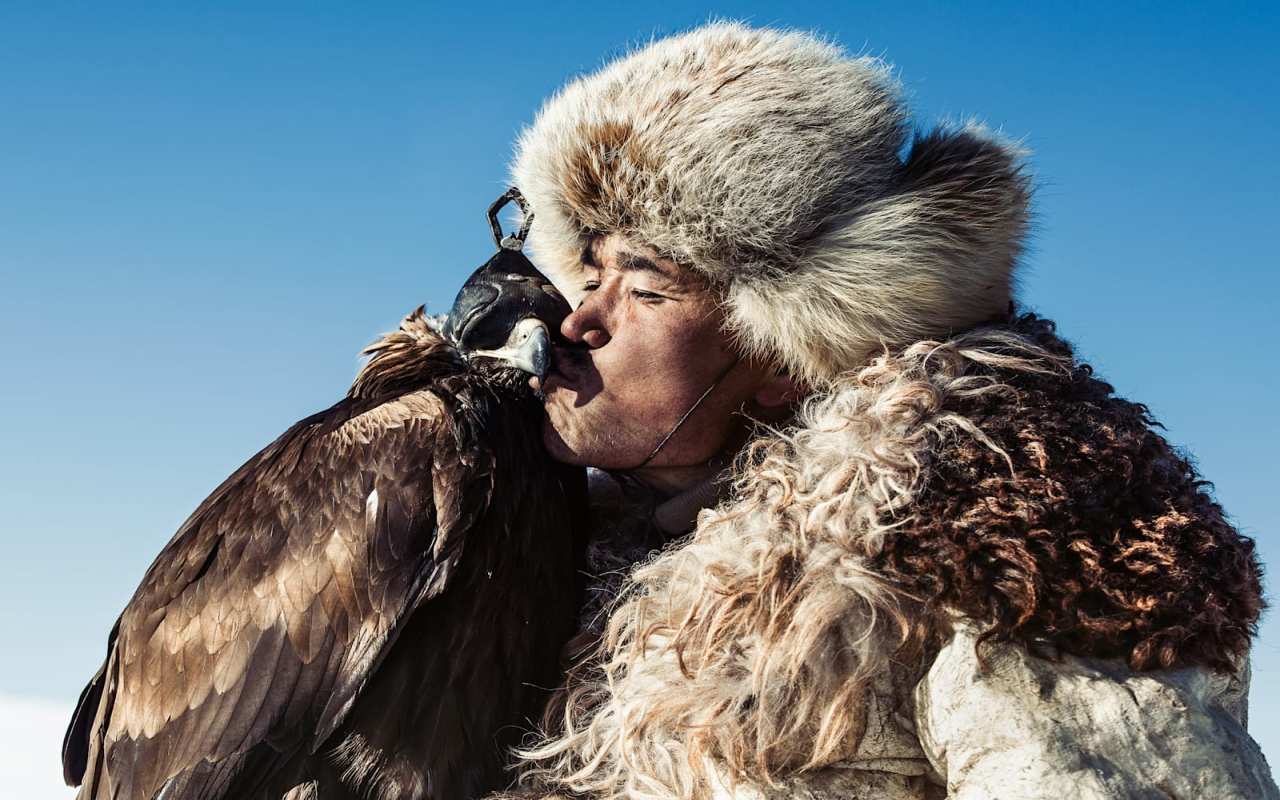 These golden birds are magnificent, with a wing span of up to 8ft, a razor sharp beak and lethal talons. They are used to hunt fox, rabbit and other small animals but also fend off and bring down wolves if they attack the Berkutchi’s herd. To be in their presence was mesmerising and I was fascinated by the intimate bond between hunter and bird. I could feel the ancient wisdom that had been passed down through the centuries. But the Burkitshi are a diminishing tribe, with estimates as low as 50 or 60 true hunters left, as younger generations choose or are forced into urban life.

My guide and translator on the migration was a Kazakh Mongolian woman named Nurbakhyt (Nur). She is one of the strongest and kindest women I have ever met. Nur guides for the summer months and spends most of the winter in her parents homestead alone, taking care of her family’s animals. With no contact to the outside world she is totally self-sufficient, living off their animal stock of camels, goats, sheep and yaks. She is a woman who runs with wolves, in every sense. She is tough, smart and strong and knows her place in nature - and in the winter the wolf packs venture closer to her home as temperatures drop.

Nur’s great love is the wilderness and she hopes to remain in this remote part of her country. She expressed her sadness to me about the loss of her culture as more herders move to the capital to seek better education and jobs and as increasingly frequent Dzud’s makes the herding life more difficult. She feels that people are having to make the agonising choice to sacrifice their health for financial stability. 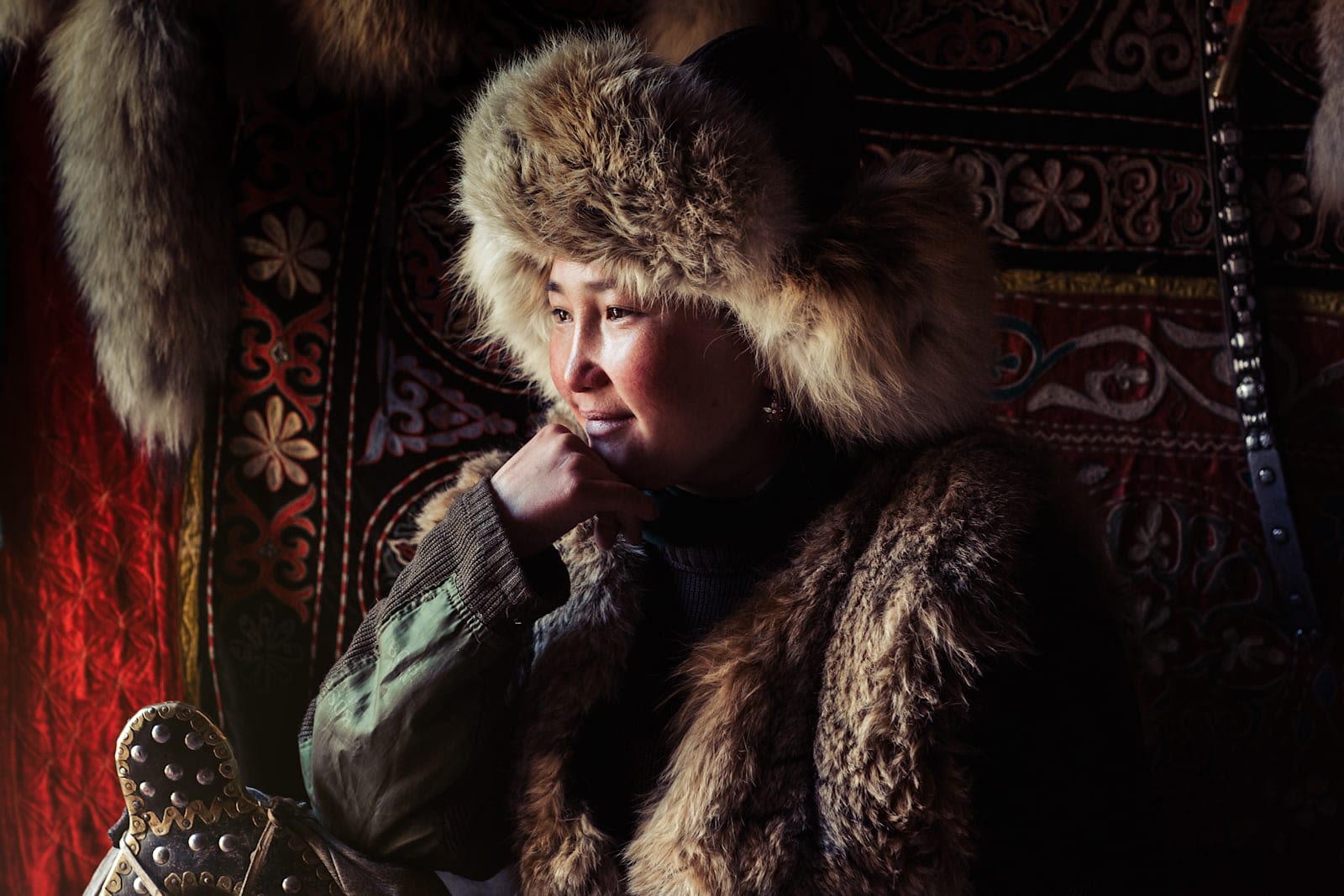 Back in UB I met Chuluun Tseren, who now lives in the Ger district. She is 84-years-old but spent 60 years as a nomadic shepherdess living in the far western Uvs province that borders the Ulgii province, from where I had just returned. She was forced to the capital to live with her daughter after she lost her herd of 750 sheep in temperatures of -50 during the Dzud of 2014. She tells me her relatives lost their whole herd of 1,500 sheep the same winter.

I photographed Chuluun in the Ger she has lived her whole life and gave birth to her six children in. Once her nomadic homestead in the grazing lands of the countryside, it is now erected in the cramped Ger district of the capital. She says it is so hard to breath outside in the winter months that she is now confined to her Ger. Despite living conditions being easier in the capital compared to the countryside, she misses her animals and can’t stand the pollution of UB. Her daughter Narantuya tells me, with humour, that her mum keeps trying to run away back to the countryside. 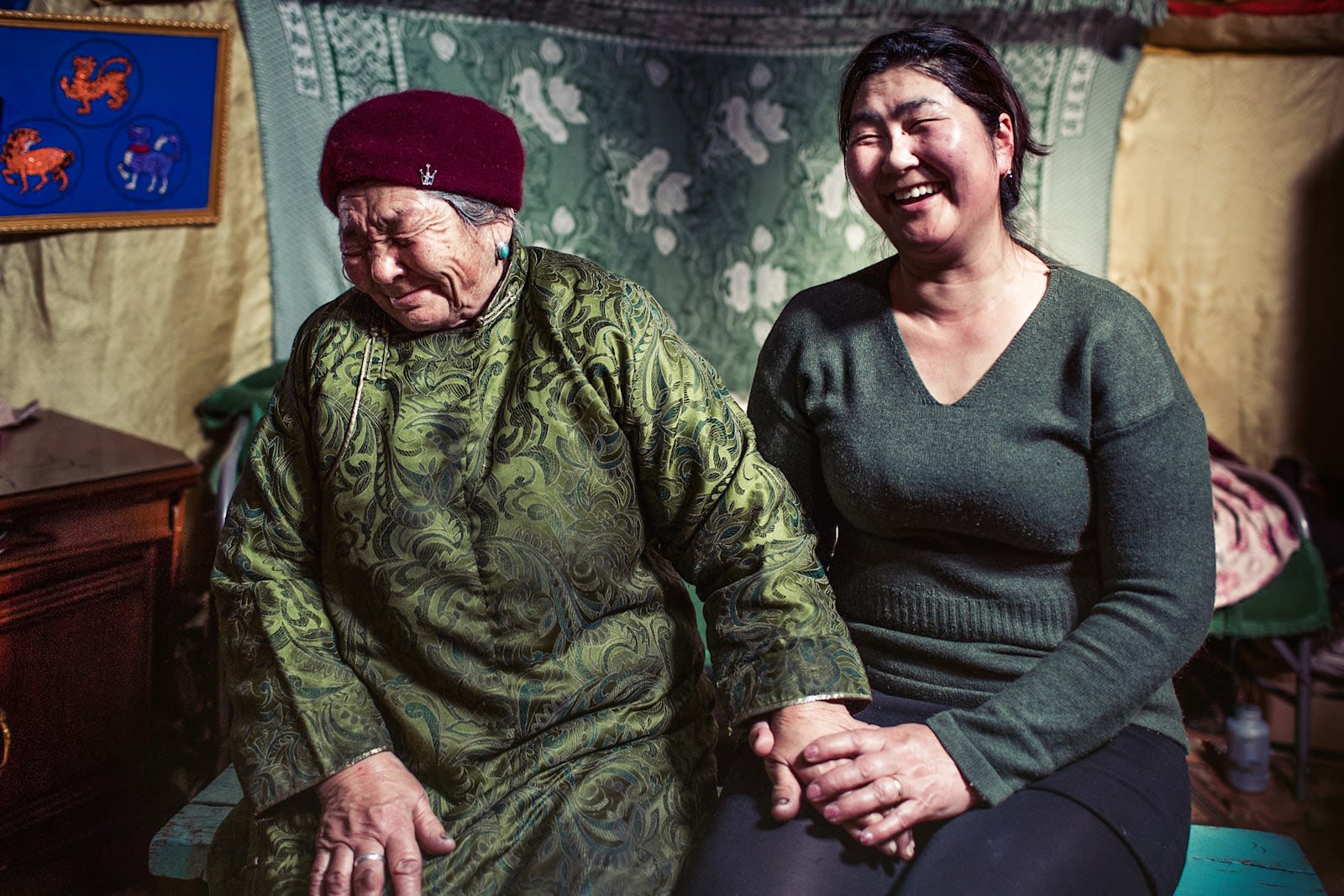 The cost to health and the economy caused by the toxic smog that engulfs UB in the winter months is dramatic. Hospitals are overrun with respiratory diseases and premature deaths and there is a profound fear of a future lung cancer epidemic. In 2018, UNICEF  published a report entitled, ‘Mongolia’s Air Pollution Crisis,’ examining the dire health crisis affecting the children living in UB. Alex Heikens, UNICEF’s representative in Mongolia said: “Air pollution has become a child health crisis in Ulaanbaatar, putting every child and pregnancy at risk.” He added: “Reducing air pollution levels is the only long term sustainable solution to protecting children’s health. In the meantime, thousands of children will continue to suffer unless urgent action is taken.”

The views of the Ger district are that of a dystopian city, punctuated with decaying post communist Russian and Korean industrial structures that create a framework for this ever growing and neglected part of town. What I found so striking about the Ger district was the absence of people. It was only later that I learned that families try to limit their exposure to the air pollution by keeping their children indoors. Children here are held back from school and are not allowed to play outside, whilst in similar temperatures in the countryside they can roam free. 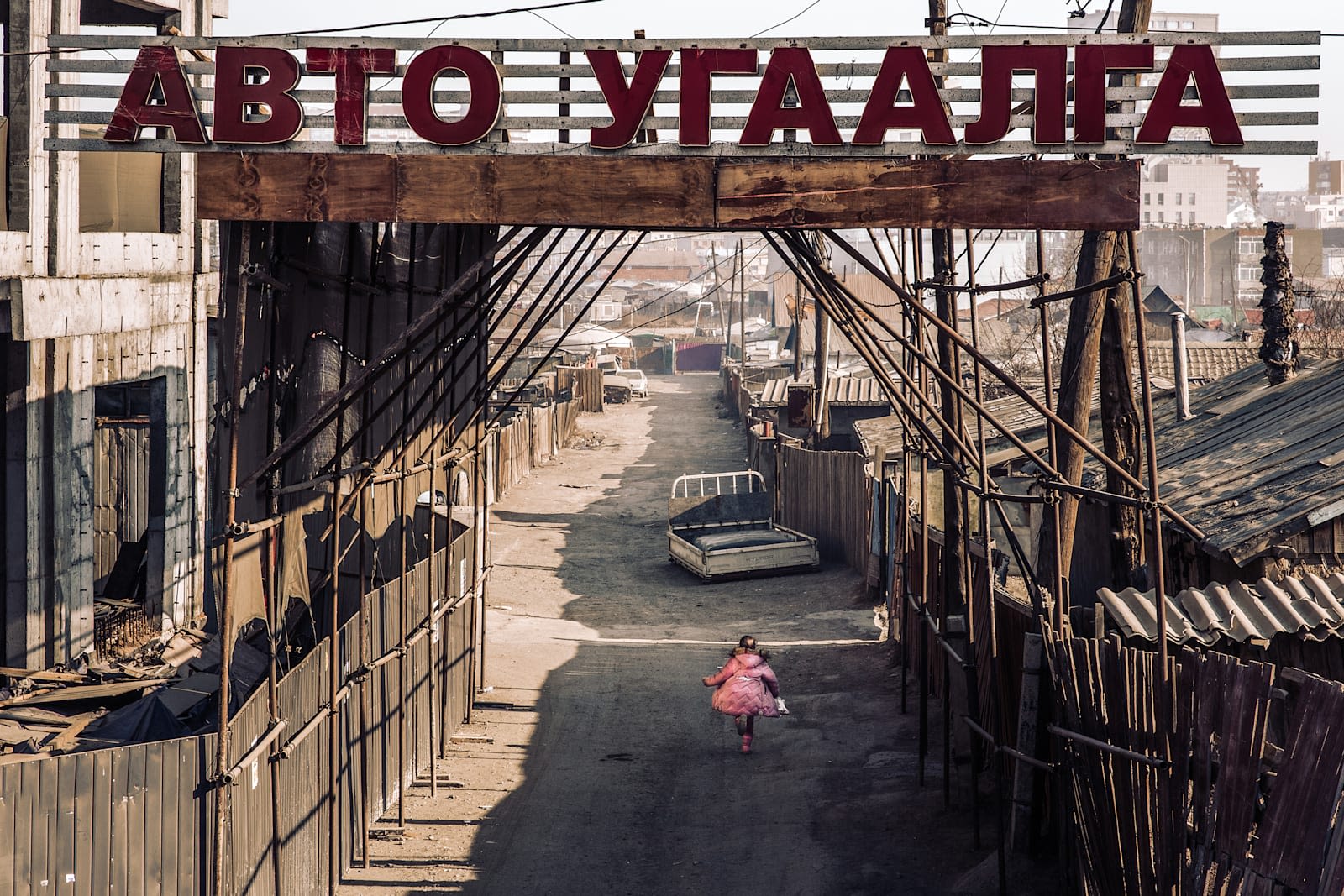 Forced migration due to the climate crisis will affect cities across the planet as environmental refugees seek shelter from the ravages of the changing climate. In doing so, it places untold pressures on existing amenities; perpetuating an increase in CO2 emissions as the terrible cycle continues. UB is certainly not the only city to feel the pressure of rapid population growth but it does illustrate a frightening portent of our planet’s future if we do not act now to move away from fossil fuels and fully embrace green energy.

Moving between two worlds, that of the traditional nomad to the forced environmental refugees of Mongolia highlights the fact that as our irresponsible untamed thirst for fossil fuels persists, the air we breathe, the water we drink and the food chains we feed upon are becoming increasingly toxic. The cities that were once beacons of opportunity and prosperity are now open air prisons that demand the heavy price of our health and where the poor, the young and infirm are disproportionately suffering the consequences.

This is a guest blog and may not represent the views of Virgin.com. Please see virgin.com/terms for more details