America has yet to face up to the racist roots of its horrific practice of judicial killings. As of January 1st, there were 2,620 people condemned to die by execution in the United States. Six people were killed so far this year.

Research by the Equal Justice Initiative shows that as racial terror lynchings came under increasing scrutiny, court-ordered executions took their place. By 1915, executions outpaced lynchings for the first time. By 1930, two-thirds of those executed were Black. And by 1950, 75% of the people executed in the South were Black Americans.

Activists led by the NAACP’s Legal Defense Fund waged a multi-decade legal strategy to prove that the death penalty was racially-biased and unconstitutional. In 1972, they won in the US Supreme Court case Furman V. Georgia, with the court ruling that capital punishment too closely resembled “self-help, vigilante justice, and lynch law” and that “if any basis can be discerned for the selection of these few to be sentenced to die, it is the constitutionally impermissible basis of race.”

A decade later, in 1987, racial bias in the death penalty was again brought before the US Supreme Court. But this time, the court concluded that racial bias in sentencing is “an inevitable part of our criminal justice system.” In the years since, racial bias in sentencing has increased. Black Americans are disproportionally sentenced to death, but the disparity is especially pronounced in situations where the victim is white. In Louisiana, the odds of a death sentence are 97% higher for those whose victim was white, and no white person has ever been executed for killing a Black man in the state. In Georgia, people convicted of killing white victims are 17 times more likely to be executed than those convicted of killing Black victims. 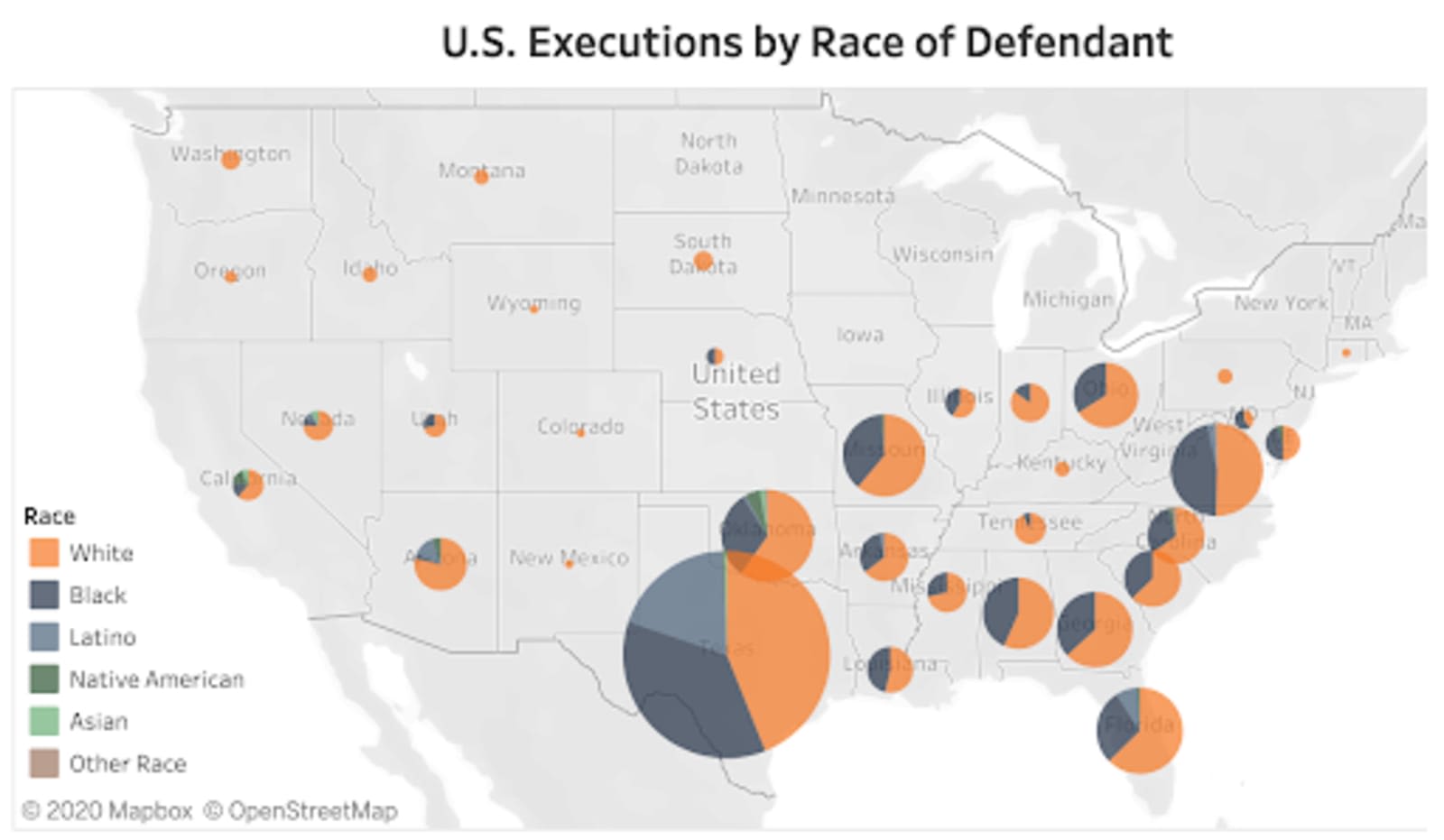 Black Americans make up just 12% of the US population, but they make up 44% of the prisoners that state governments plan to execute. Image from Death Penalty Information Center

Black Americans make up just 12% of the US population, but they make up 44% of the prisoners that state governments plan to execute. Map source: Death Penalty Information Center

While use of the death penalty is increasingly rare - out of around 16,000 homicides in the US last year, juries returned death sentences in just 42 cases - its roots in the legacy of racism and white supremacy continue to surface. Los Angeles, for example, has seen over 1500 homicides since 2012. 22 people were sentenced to death, and all of them are people of colour. From implicit bias, to racist tactics like striking Black jurors, to overt racism and white supremacy by those making accusations or judging a defendant’s guilt, the many ways this legacy continues to manifest are unacceptable.

The unfair application of the death penalty should be halted by ending the practice altogether.

As we continue our efforts to end the death penalty, we have a growing number of inspiring leaders to guide the way. Anthony Ray Hinton, who is one of many people falsely accused of murder by racist police officers and condemned to die by a state's racist criminal justice system, is at the top of my list. Hinton suffered through nearly 28 years on death row for a crime he didn’t commit, yet he relives the nightmare again and again by sharing his powerful story with audiences around the country, each time converting more of us to the cause.

Anthony Ray Hinton reflecting on his 30-year journey to overcome the racist system that sentenced him to die.

The lead lawyer who stood by Anthony Ray Hinton while he fought to prove his innocence was Bryan Stevenson, founder of the Equal Justice Initiative. Stevenson’s long been a North Star for those working to advance human rights. His work has focused on providing equal justice for those who were denied it because of their ethnicity or lack of means. And his organisation is helping us connect the history of racism and white supremacy from slavery to racial terror to bias in today’s criminal justice system, including in the death penalty.

Another inspiring leader is Sister Helen Prejean, who’s dedicated her life to helping the families of murder victims and those condemned to die, reminds us to check our privilege - especially if it’s white. Her latest book, River of Fire, tells the story of her journey to understanding the realities of race relations in the United States and how it informs her work to abolish the death penalty.  And there are many more.

Equal Justice Initiative describes the death penalty is a direct descendant of lynching In America. If we truly want to confront the racism and white supremacy woven into our history and still present in insidious ways today, the death penalty should be abolished.