Feeling supersonic: What does the future hold for air travel?

For many years the prospect of supersonic air travel looked dead in the water for commercial flyers, however two leading contenders have recently emerged to fill the void left by Concorde...

2003 marked the end of supersonic commercial air travel as we knew it, with British Airways taking Concorde out of service. In fact, the airline was so keen to ensure that flyers wouldn’t be given the chance to go supersonic again that they decided to cut the wings off the plane. For all the talk of travel innovations it seems rather bizarre that over a decade later supersonic air travel is still off the cards for your average air passenger.

However two leading contenders have recently emerged as the favourites to fill the void, with Boston’s Spike Aerospace and Nevada’s Aerion Corporation both well underway with plans to make a boom in the travel industry. Aerion’s NASA-backed design and Spike Aerospace’s unique windowless cabin, not to mention top speeds looking to hit Mach 1.8 (1,200mph), have won them both many admirers.

To get a better understanding of what makes the two companies tick we sat down with Doug Nichols – CEO at Aerion Corporation and Vik Kachoria – CEO at Spike Aerospace, to get their views on going supersonic and the future of air travel.

How long until we could be booking a flight on The S-512?

Vik Kachoria: Spike Aerospace has been working on the Spike S-512 Supersonic Jet for about two years. We estimate another five to seven years of engineering, testing, certification and manufacturing. The first deliveries of the S-512 should be in about 2020.

Why is going supersonic such a difficult challenge for engineers to overcome?

VK: Flying supersonic is actually not all that difficult. Maximizing fuel efficiency, minimizing noise, ensuring safety and making a profit is a challenge. The military has been flying supersonic jets since the 1950s – but they don’t worry about costs, fuel efficiency, noise or even passenger comfort. They can turn on the after-burners and get anywhere fast.

The Concorde, an incredibly elegant supersonic civilian aircraft, was designed in the 1960s when fuel was abundant and cheap. But the aircraft used four not-so-efficient military engines and made a heck of a lot of noise on take-off and landing. The noise and sonic boom the Concorde created were barely tolerated on its London/Paris to NYC flights and has been prohibited by most governments. Unlike the 1960s, the cost of fuel is expensive now and is the single biggest single cost in aircraft operations. A shortage in fuel or increase in cost of fuel can make or break an airline.

How long until we could be booking a flight on an AS2 business jet?

Doug Nichols: Our plan is to certify in 2021, with the Aerion AS2 aircraft entering service with customers in 2022.

Why is going supersonic such a difficult challenge for engineers to overcome?

DN: In a word, drag. The faster you go, the more drag an airframe produces, requiring more power and more fuel to push that object through the air. Aerion’s key innovation - its enabling technology - is a supersonic natural laminar flow wing, designed over many years and proven in flight with NASA. It reduces friction drag over the wing by about 50 percent and total airframe drag by about 20 percent. Those are quite large numbers in the aviation world. It means you can now generate fuel efficiencies allowing you to cross the Pacific nonstop supersonically. 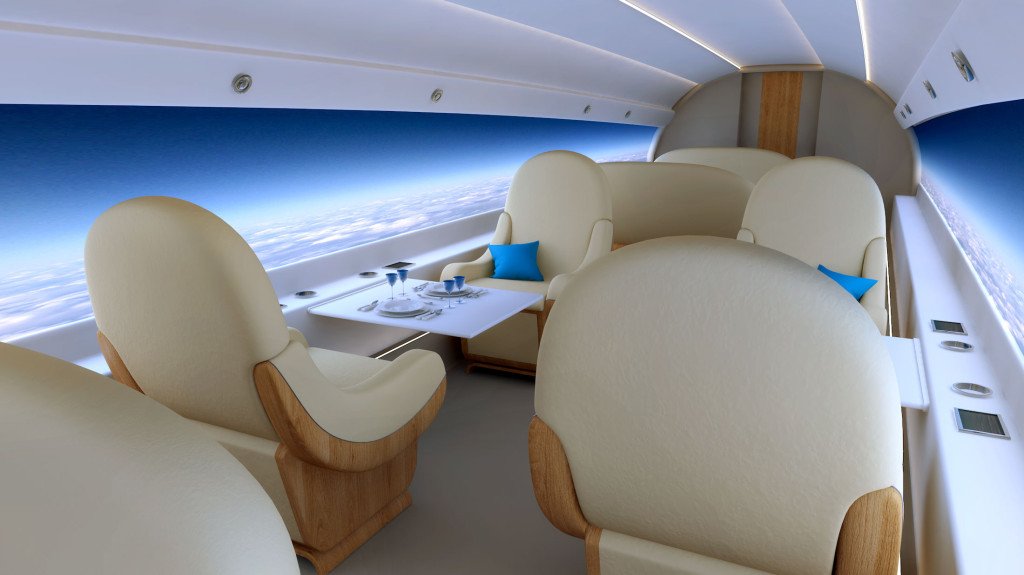 What is the thought process behind having no windows (as you can see above) and what are the risks that come with this?

VK: In every aspect of our design, we have been looking for ways to improve fuel efficiency, reduce noise and ensure safety. The thought behind the windowless cabin was in pursuit of these goals. By removing the windows, there is an improvement in fuel efficiency because the exterior of the fuselage is smooth and drag is reduced. This is similar to a swimmer who shaves his body to minimize drag in the water and improve performance. A smoother fuselage means we can fly faster and more efficiently.

Inside the cabin, passengers will be able to enjoy wonderful panoramic views of the outside world. No more tiny port-holes to look through. No more glare of the sun shining through. And no more view of the black of the night. If passengers prefer, they can watch a movie, work on a presentation or dim the screens to a starry night and get some sleep.

The Multiplex Cabin is possible with the use of high resolution flat panel displays and digital cameras that simply were not available just five years ago. Several windows will be available for emergency purposes and can be used by passengers for a quick look outside. The windowless cabin is just one of the many of the innovations we will feature on the Spike S-512 Supersonic Jet. 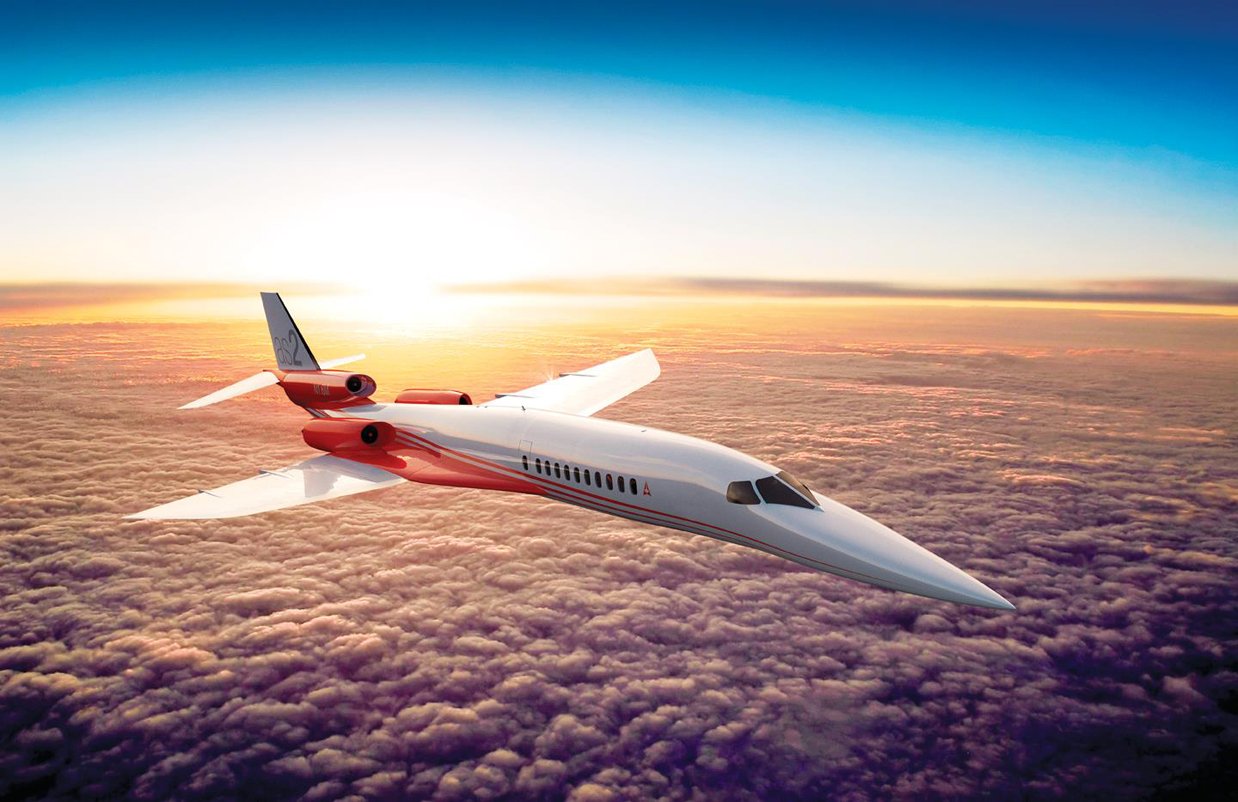 How would you describe the experience of working with NASA?

DN: We would not be here without NASA. NASA has flown a series of Aerion test wing sections on their F-15B aircraft, proving the supersonic natural laminar flow concept. That has helped us advance the technology and solidify our plans to introduce a practical and efficient supersonic business jet.

What are the main barriers to innovation in the travel industry?

VK: Aviation is a tough industry to introduce new innovations for two key reasons: tough government regulations and the high costs of research and development. Government regulations are in place for good reason - to protect the passengers on the aircraft, people on the ground and the hundreds of millions (or billions) of dollars of property. Nobody wants to see an aircraft meet a tragic end, thus tough government standards have to be met by every innovation before being introduced into the industry. The process of certifying that innovations meet the requirements can be 30-50% of its research and development costs.

What do you think air travel will look like in 30 years’ time?

VK: In less than 30 years, everyone will be flying supersonic, perhaps hypersonic. Everyone will be looking towards point to point travel – anywhere in the world in one and a half hours. There will be some initial travel to earth orbit which will continue to expand. Perhaps our first manned trip to Mars? Aviation is going to change more in the next 10 years than it has in the last 60 years. It is going to become safer, faster, more efficient. Some of these advances will start in commercial aviation (airliners) such as more fuel efficient engines, use of bio-fuels, more direct routes to destinations, cabin ventilation and comfort, collision avoidance and advanced avionics.

What are the main barriers to innovation in the travel industry?

DN: Imagination! It’s not money and it’s not technology. What’s needed is vision. When you put the three together you get forward-thinking companies such as Aerion.

What do you think air travel will look like in 30 years’ time?

DN: We’re doing our part to make civil airplanes go nearly twice as fast. Somebody else is going to have to figure out how to make what happens before you get on the plane and after you get off a faster and a more pleasant experience. The world is becoming more prosperous and many more people will be traveling. I don’t want to contemplate a world in 30 years where the airport experience is what it is today.

Speed compresses time and makes distant parts of the world more accessible. When you can fly from New York to Shanghai in half the time, you’ll see more people doing more business, and building more commercial and cultural bridges internationally. We saw that with the transition from piston planes to jets like the Boeing 707 - half a century ago! We’ll see another advance with the advent of supersonic travel.